A “Shot” At Taking Down Cancer 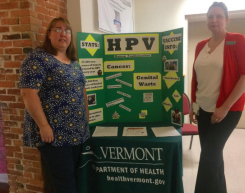 Parents do just about everything they can to protect their children’s health. Parents should be aware of a strong weapon to help prevent several types of cancer in kids when they get older, it’s called the HPV Vaccine.

An HPV Clinic, where the vaccine will be administered, will be held at BFA on Wednesday, October 12, in the BFA gym.  It will take place before school.  The Clinic will run from 7:00 AM until 8:00 AM.

Human Papillomavirus (HPV) is a virus passed from one person to another through skin-to-skin sexual contact.

20 million people are infected with HPV in the United States and 6.2 million more are infected each year. Most HPV infections don’t cause any symptoms and usually cure on their own but HPV has become increasingly monitored recently because the virus can cause Cervical Cancer in women who are infected.

In the United States about 17,500 women and 9,300 men are affected each year by HPV related cancers. These can all be prevented with the HPV vaccination.

Gardasil-9 is one of three FDA approved HPV vaccines. Both male and females at ages 11 to 12 can routinely get the vaccination through their health physicians. Three doses of Gardasil-9 are recommended.

The vaccination wards off four major types of HPV, two in which cause 70% of cervical cancer.

Valerie Lipka, BFA’s pediatric nurse said, “The vaccine is recommended to be given at age 11, but people are hesitant about that. When you are 11 you build better immunity to the virus so that’s the only reason doctors recommend it at that age, not because they are sexually active.”

Lipka met with the Vermont Department of Health (DOH) to propose the idea of getting the first vaccination shot at BFA.

Lipka will not be “administering the vaccine,” but will be “helping to promote, organize and make sure the facility is set and to act as a go between to answer any questions parents and kids will have about the vaccine.”

To promote, Lipka sent out a letter at the beginning of the school year, while arranging the Vermont DOH to come during lunch and answer any questions from students.

Lipka is the main link between BFA and the DOH.

All insurance companies will pay for the vaccines.

The 1st dose will be offered at BFA and then the students parents will have to schedule an appointment with their primary physicians for the second and third dose.