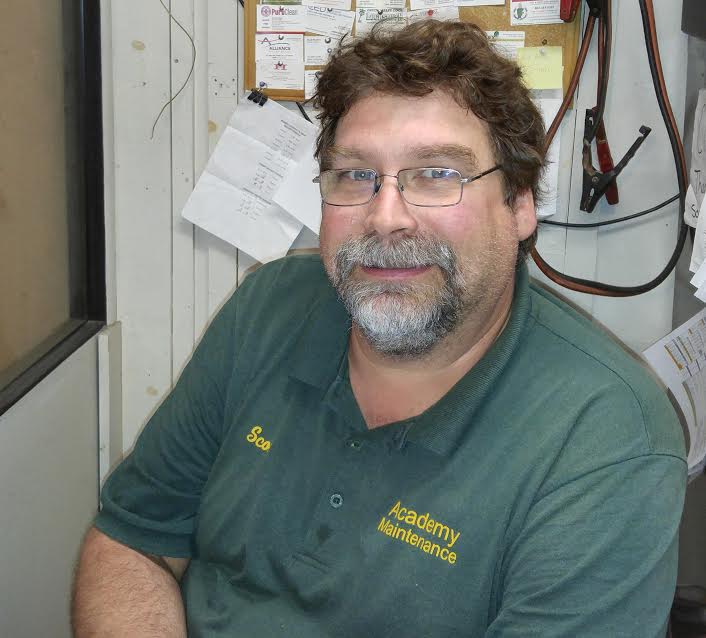 BFA has a boatload of people ready to give their time, dedication, and effort at any instant to make the school a safer and better environment for students and staff.

Scott Martin is one of those people.

Martin keeps the school safe and clean for all the community to use as the Facilities Manager of BFA. In this job, he is the head person for the BFA Maintenance Department.

“I like [that I’m] able to fix things. I like to be able to work with people. I think I have a lot to contribute to people in the community in doing what I do,” Martin said.

Before working as BFA’s Facilities Manager, Martin worked at both a chocolate factory and Ben and Jerry’s.

Martin however, saw a better future.

“I found that factory work was not something that I was really enjoying, I found myself frustrated,” Martin said.

Martin became the Facilities Manager in January of 2016.

Another aspect of Martin’s life is that he has coached basketball for 23 years at just about every level.  He coached the 7 & 8 grade boys at City School, as well as the junior varsity girls at MVU for a number of years.

Overall, BFA has improved since Martin has taken the reins, and he attributes this to his “team.”  The “team” consists of the many dedicated and hard-working custodians and maintenance staff who pick up after the school every day, as well as fix things that break.

“It comes down to me being proud of the team that I work with because without the team that we’ve put together here, there’s no way we would be where we are,” Martin said.

Martin has taken an initiative with the solar panels installed on the roof of the north building.

“I’m trying to be able to record and track how much energy we are recovering from the solar panels.  Then take that information and feed it back to the public to let them know what were gaining from that,” Martin said.

Martin’s versatile skill set, including his skills working with others, are a welcome recent addition to BFA. Word has it that he cooks a pretty mean barbecue, as well!