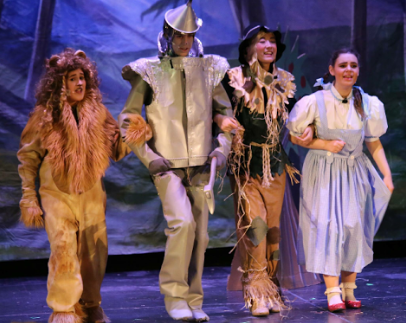 BFA drama students participate in the dress rehearsal for the Wizard of Oz musical.

Dorothy has made her way to Bellows Free Academy!

The Wizard of Oz made its debut on November 10, with Rosie Newton (‘19) taking the lead as Dorothy.

But is BFA losing one of it’s many unspoken traditions? For the last four years, BFA cast seniors as leads, so why is it different this year?

In BFA drama’s process to determine which students should be assigned to which roles, a reported eight seniors left the production.

In many school clubs and sports, there is a natural progression into leadership roles, with seniors dominating those leadership roles.  However that is not the case for seniors who auditioned for the musical The Wizard of Oz.

So why were mostly underclassmen cast into lead roles?

In order to better understand the casting process for other schools,  MVU was contacted and no response came back. Peoples Academy director for the play Legally Blonde was unable to give information about the cast’s ages for privacy reasons, and Enosburg had not started their casting yet, but were able to give ages of past year’s casts.

Lamoille High School had lead roles cast to two seniors, one junior, and one seventh grader for their production of High School Musical. 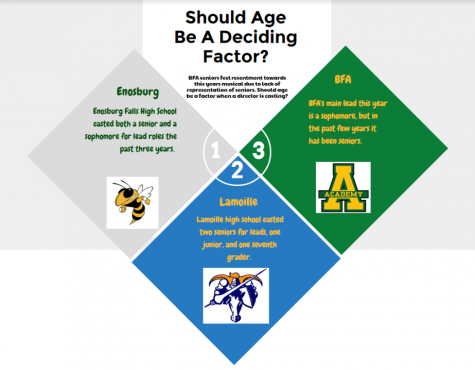 Enosburg’s past three years of productions have been a pattern of one sophomore and one senior for their male and female leads.

Evidently, leadership roles are not exclusively kept by seniors at these Vermont high schools.

“If it were another play, any one of those seniors who left the play could have gotten the lead. They just didn’t fit the part,” Robert Harte,  Director of the production for BFA, said.

Harte also serves as the Drama Teacher for BFA. Harte’s experience in the field of theater is extensive, as he has tried out for roughly 1,500 roles in his lifetime.

“The most important thing I could tell you is that the cast is the director’s prerogative. They are going to make the cast that makes the strongest complete show in their opinion,” David Gabaree, Musical Director of Peoples Academy said.

The casting process is clearly very difficult not only for BFA.

“I know in the past it’s been seniors who have gotten the lead roles, but that’s because they fit the part,” Harte said.

Many of the seniors sensed little consideration for seniority during the casting process.

“I definitely felt like there was a lack of respect towards the seniors,” Ethan Baker (‘17) said.

Not only did the seniors note differences in casting, the underclassmen felt it as well.

“I think it’s a very difficult thing to figure out, and it just didn’t end in the seniors favor this year,” Stephanie Bidwell (‘18) said.

“It was mostly singing, which made it hard for those of us who never took years of vocal lessons compared to some of the others who auditioned,” Baker said.

Through the loss of the seniors, the underclassmen are able to grow their skills and have more experience under their belts for years to come.

“I think they’ll do the drama department well in the following years,” Lucia Pelkey (‘17) said.

Despite all of the controversy, the seniors are still very supportive of their peers.

“While I wasn’t happy with the casting, I’m still going to see the performance and  support my classmates who I believe will do really well,” Pelkey said.