Coyote hunting: “Who the howl cares?” 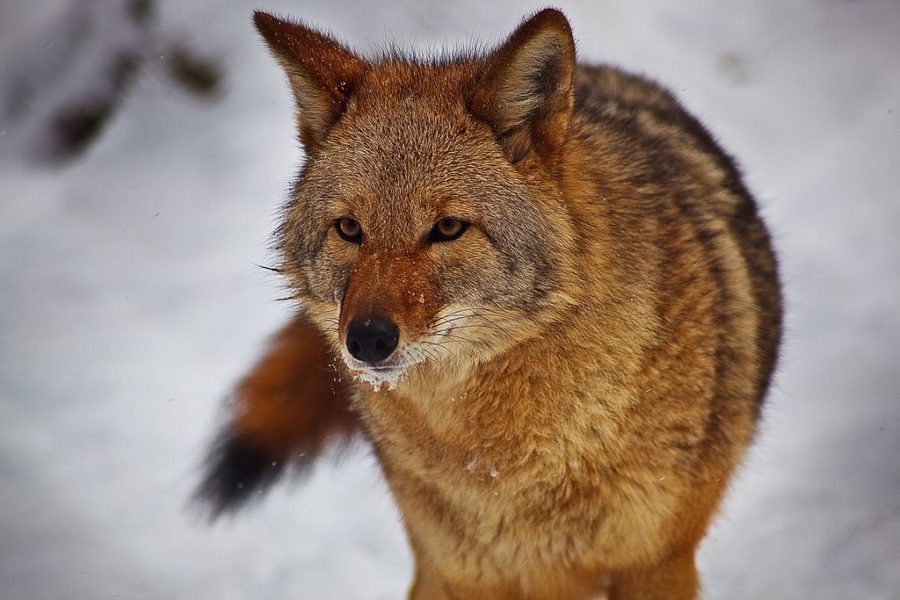 When you mention “Vermont,” many people think of deer camps and maple syrup and cows.  Imagine having to help Vermonters find the ideal balance between the wild part of Vermont, with the domesticated parts that go together to make Vermont special.  This is one of the reasons the Vermont Department of Fish and Wildlife (VTDFW) was created.

“The department’s mission is “the conservation of fish, wildlife and plants and their habitats for the people of Vermont.”

Hunting, trapping, and controlling wild animals is part of any conservation program.

Many BFA families have proud traditions of being responsible hunters of deer and other species. Few would dare to question the right of a licensed Vermonter to go out to locate and shoot a white tail deer to put in the freezer.

Many other BFA families have proud traditions of farming, and particularly dairy farming.  The cows have to be protected from predators.

A predator that can prey on both deer and dairy cows is the coyote.  The “Eastern Coyote” is a predator that is currently provoking controversy in Vermont.

In their 2017 online fact sheet titled “Eastern Coyote Issues – A Closer Look,” the VTDFW states: “The Vermont Fish & Wildlife Department believes that both predators and prey species are vital components in a healthy ecosystem. Deer and other prey species evolved with predators and as such, we neither regard predators as undesirable, nor do we view them as a significant threat to game populations.”

With an outlook and policy like this for maintaining the balance between game/prey species and predators, there is room for interpretation of what is the “right” course of action in making laws regarding hunting.

The question of what is “right” within the current law on hunting coyotes is an issue that divides Vermonters.

“The Vermont Fish & Wildlife Department believes that both predators and prey species are vital components in a healthy ecosystem.” As the ones who design the laws that govern hunting, the VTDFW’s expert opinions, based on science, are important.

“We do not believe that the current hunting and trapping seasons impact the population in the long-term, as coyote numbers are much more limited by prey availability than by pressure from hunting or trapping,” the VTDFW wrote.

What makes this controversial is the now legal practice of hunting coyotes as part of a contest.   Some see any “killing contest” as wrong.

“In recent years, competitive coyote hunting contests have been held by hunters. The Department does not sponsor, promote, or encourage coyote hunting tournaments. Although these activities follow laws and regulations, we do not believe such short-term hunts will have any measurable impact on regulating coyote populations,” the VTDFW wrote.

But there are many opinions on this.

Cole Gratton (‘15) of Swanton, suggests, “…there are contests for many animals. There are deer pools, moose pools, turkey pools, and so on. In a way you could say it’s similar to the biggest fish caught in a fishing tournament or the biggest “bag” of fish. I think it’s okay for contests. Animals need to be shot to keep populations level. So why not weigh them and see the size of the animal which you shot,” Gratton said.

On the other hand, activists feel that coyote hunting contests should be outlawed.  On Feb 11, in Bristol, seventy-five people gathered for a peaceful protest to stop a coyote killing contest.

The “Wiley E. Coyote” contest being protested against was organized to see how many coyotes could be killed in a four-day period, and then to award prizes to hunters for the largest coyotes.

The protestors were organized as the Vermont Coyote Co-Existence Coalition.  VCCC advocates respect and humane treatment for coyotes, and approaches for peaceful coexistence with one of Vermont’s most misunderstood and vilified predators.  VCCC is a loose coalition of people who would like to see coyotes treated humanely, and the stability of packs respected.

Some protesters held up signs that said, “NO KILLING CONTESTS,” “STOP THE OPEN SEASON,” and “REGULATE COYOTE HUNTING.”

Currently, coyote hunting is legal 365 days a year in Vermont, no matter the time of day.  The protestors suggested that some of the most common methods of controlling coyotes include drowning, clubbing to death, suffocation, shooting, allowing hunting dogs to maim and kill the coyotes, body crushing traps, and leg-hold traps.

Many protesters see these methods as inhumane.

Oliver Manning (’14) has a family farm in Sheldon.  He is a hunter. “Trapping often gets a negative image from animal welfare groups stating that it is harmful and painful to the animals, but I strongly disagree because when done right, with proper equipment, the animals feel little to no pain at all,” Manning said.

And acting to protect your domestic animals is legal.

Manning has encountered problems with coyotes. “. . . coyotes will come into the barn at night and if the door to the chicken coop is left open they will eat my chickens.  I have also had problems with coyotes harassing cattle in the pastures even to the point of the cattle breaking their fences to get away.  Coyotes also eat newborn calves,” Manning said.

But much of the controversy does not question whether hunting itself is right or wrong.

Sophia Parker was one of the people in attendance at the Bristol protest. “A lot of my closest friends, neighbors, and relatives hunt deer and take what they need in a humane way, regulated by Vermont state laws, and they use the meat to feed their families all winter,” Parker said.

Again, the hunting of deer for human consumption is not really at issue.

“Well, hunting deer is in a way like coyote hunting. It’s for controlling herd population. But also for food. I love eating [venison],” Gratton said.

When talking to some of the hunters in attendance at the protest, Parker explained that they also supported increased regulations of coyote hunting.

“I do understand that some people feel strongly about wanting and needing to kill coyotes,” Parker said. “They believe that killing should not occur just for fun or in a totally unregulated way.”

While some hunters would support new regulations, others wouldn’t want anything to change.

“I don’t see coyote hunting as a serious threat to the coyote population.  Most coyote hunters that I know don’t hunt very often and most of the coyotes that I see culled are done so by deer hunters who see coyotes while hunting deer, or farmers who see them around their livestock or barns,” Manning said.

Current BFA student Mary Cushing is a hunter.  “You have to look at the population and if you’re using the coyotes in a reasonable way,” Cushing (‘17) said.

Regardless of any changes that should be made to Vermont law (according to the contest protestors) the coyote will remain a wild predator in Vermont for the time being.

“The hunting and trapping of coyotes does play a role in keeping this very adaptable animal wild. In areas of the country without hunting or trapping, coyotes can become habituated to humans, especially if they are fed. In these areas, negative interactions between humans and coyotes increase with little recourse for resolving the problem,” the VTDFW wrote.

If you have an opinion about this topic, please visit bfamercury.org, our online edition, and take the poll regarding coyotes and contests.