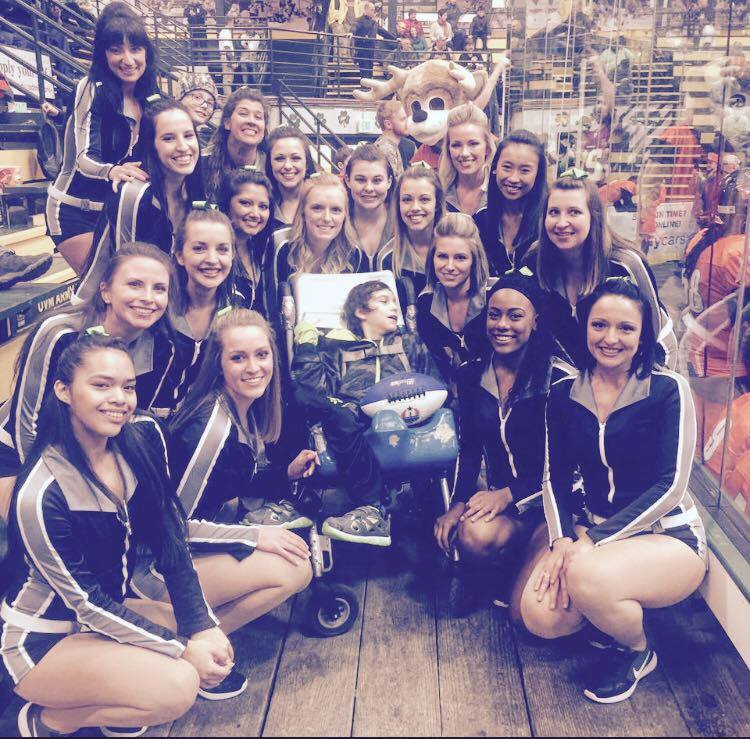 Many varsity BFA sports have the support of some type of cheerleading team. Whether it be shaking pom-poms as a cheerleader, or dancing for the BFA Dance Team, these groups are a big part of what makes BFA games fun and entertaining.

“It’s a life-long activity that can be used to create a user friendly environment as a way to fulfill their desire to continue to dance, but at the same time entertain fans,” Dan Marlow, BFA Athletic Director said.

After graduating from BFA, some of these cheerleaders and dancers go on to college, and continue doing what they love on a bigger stage or field than what is possible at BFA.

And some are able to continue their cheering and dancing on an even higher level.

As a matter of fact, three recent BFA graduates are doing so in Burlington.  Tori Hubbard ’13, Alexis Taft ’15, and Meghan Petrie ’13, are all dancing on the Vermont Does dance team. They cheer and perform for the newest addition to Vermont sports franchises, the Vermont Bucks indoor professional football team.

The “Dance Team Coordinator” for the Vermont Bucks Dance Team is Rose Bedard.  Bedard is a very well-known face in the St. Albans and Burlington dance community.  She works at SATEC and teaches many dance classes here in town, while also helping the hip-hop classes at BFA.

According to the Bucks Dance Team Facebook page, “She continues to teach and choreograph at local studios such at the Flynn Theater and Performing Arts Center, Electric Youth Dance Company, 2INSPIRE Dance Company, and Burlington Parks and Recreation. She also has volunteered her expertise for Rice Memorial High School’s Stunt Night, Miss Vermont Scholarship Pageant and other local schools and events.”

Yet another BFA connection to this dance team is the involvement of World Language teacher Kristi Leet.  Leet and the other three BFA graduates are part of a company of 18 dancers, who sometimes go by the Lady Does, or #ladiesdoes

We represent a variety of backgrounds and ages, so I think it’s really neat. Everyone is super sweet and gets along well,” Leet said.  “We typically perform three dances per game.  One just before the game begins, one during a time out, and one during halftime.”

This opportunity for all of these young women to dance on a professional level has been made possible by the creation of the Vermont Bucks.  Ervin Bryson is the head coach of the indoor arena football team. The Bucks play at UVM’s Gutterson Fieldhouse arena, which is also home to UVM Catamount Men’s and Women’s Hockey.

The Vermont Bucks play in the CAN-AM Indoor Football League, which includes the Bucks, and 6 other indoor arena football teams.   These teams include: the Rochester Kings; the Buffalo Blitz: the Ontario Spartans; the Glens Falls Gladiators; the Boston Blaze and the Connecticut Chiefs.

The Burlington Free Press’s Alex Abrami caught up with Bryson to talk about what it was like to step into Gutterson for the first time.

“To be able to put the first professional football team here in the state of Vermont, I’m just so excited,” Bryson said.

As a new sports franchise in Vermont, the Bucks have been reaching out to the community to involve their players in positive connections. Players for the Bucks have spoken at many schools around the state, including at BFA.  They have also spoken to Rotary Clubs as well.

While the excitement is created there in Burlington by the players, the Buck’s Dance Team, with significant Franklin County roots, is spreading its own energy at the games and in other positive community based activities.

“Hubbard is from Saint Albans, Vermont and a senior at Saint Michael’s College.

She started dancing with 2Inspire Dance Company at the age of 11. Tori is also a member of the St. Michael’s College Women’s Hockey Team.  She is looking forward to supporting the Vermont Bucks Football Team, while doing something that she has always been passionate about- dancing!” (Bucks Facebook page).

Fitting her dance in between her academics and other sports has been positive for Hubbard. “I did dance throughout middle school and high school with Rose Bedard and she told me about the tryouts for the Vermont Bucks dance team . . .  It’s a great camaraderie; it’s an awesome group of girls. It’s really taught me a lot about myself and about dance,” Hubbard said.

The second BFA graduate on the team is Alexis Taft. “Alexis is originally from San Diego California and currently resides in St. Albans, Vermont. She first started dance when she was 6 years old . . . She also been a part of the BFA Dance Club, Dance Team and a member of the 2INPIRE Dance Company and is a self-taught break dance and popping/animation dancer.” (Bucks Facebook page).

Taft is quick to emphasize the physical nature of her craft.

“During half-time we do this big thing of stunts and I just love doing it because I love doing tricks,” Taft said.

She is excited for the future with the Bucks Dance Team and hopes to grow as a dancer as she gets more dynamic with her dancing” (Bucks Facebook page).

The third dancer who attended BFA is Meghan Petrie. “Meghan was born and raised in Georgia, Vermont. She has sixteen years of dance experience at Electric Youth Dance Company and with 2INSPIRE Dance Company for one year. She will be graduating this May from UVM with a degree in Mathematics. Meghan is looking forward to dancing with an amazing group of women and getting to represent the Vermont Bucks in our community” (Bucks Facebook page).

Rounding out the BFA-connected dancers is Kristi Leet. “Leet grew up in West Pawlet, VT and now lives in Highgate with her husband Brandon. She is a French teacher at BFA St. Albans who enjoys incorporating music and movement into her classes as much as possible. Since living in Franklin County, she has had a blast participating in the past two summer musicals at the Enosburg Opera House. Kristi is looking forward to the camaraderie that comes with being a part of a team like this” (Bucks Facebook page).

As for the franchise that has made this all possible, the Bucks are having a very successful first season. They have finished the regular season with an 8-1 record, and are now headed to their first play-off game on June 3rd.

“People have been coming to watch us play and have been really excited about this,” Coach Bryson said.

For the future of indoor, arena football, Bryson and the Bucks have their eyes on the league championship.  Along with that, he wants to make arena football a sport that people can enjoy in the spring and have something to look forward to.

“In the springtime it’s really cold and I think it would be an awesome thing for the local community to get out and watch a professional football game and Vermont can call it their own football team,” Bryson said.

And rest assured, the Franklin County contribution to the Vermont Bucks Dance Team will keep working to heat things up.

“The football players are amazing to watch, it’s kind of like an NFL arena. It’s always hyped up for every game there’s music and the all the football players come out in a line and we all do tricks for every player. Everyone is cheering and it’s a lot of fun,” Taft said.