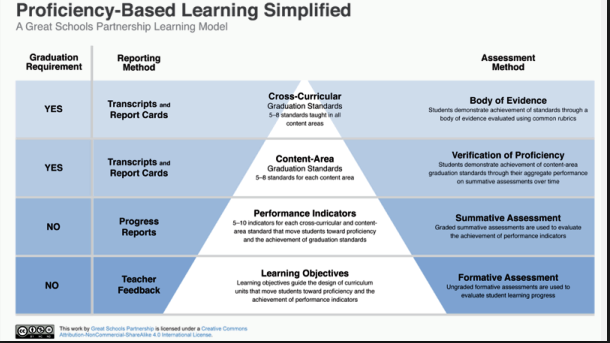 Recently, BFA’s been in a new phase with the new PBGR/PBL grading system and the newly implemented Learning Management System (LMS) known as Canvas.

The Vermont Agency of Education says; “Proficiency-Based Graduation Requirements (PBGRs) are the locally-delineated set of content knowledge and skills connected to state standards that, when supplemented with any additional locally-developed requirements, have been determined to qualify a student for earning a high school diploma. Vermont’s Education Quality Standards (EQS) require that schools’ graduation requirements be rooted in demonstrations of student proficiency, as opposed to time spent in classrooms.”

According to BFA’s printed “Proficiency-Based Graduation Requirements Class of 2020 Guide for Parents and Students,” “The goal of Standards-Based Grading is to improve student achievement by focusing instruction and the alignment of curriculum with the essential standards.” It also says that the new system will provide better communication to students, parents, teachers and administrators on what each student knows and and is able to do according to the identified standards.

But does the new system really provide better communication?

Almost all parties involved with the new PBL/PBGR are unsatisfied and they believe that it is confusing and that the old system was superior.

Shannon Warden is the Assistant Principal for Curriculum and Staff Development.

Warden’s job is to oversee the teaching and learning that happens in the school, and her role in implementing the transition to Proficiency-Based Learning has been to work with the different teacher leadership groups in the school to develop what the proficiencies and graduation requirements are composed of.

Proficiency-Based Graduation Requirements, or PBGRs, are what the school has switched to in order to measure student success. The school used to grade on a scale of 0-100, but to implement the PBL, recently switched to a 0-4 scale, and this is a major change.

Four is “expanding on proficient.” Three is “Proficient” (this is the standard for graduation). Two is “developing.” One is “beginning.” Zero is “insufficient or no evidence of proficiency.”

Because a “Proficient” earns a score of three, it has a numeric value of 75 on the old scale.  This is confusing to many students and parents, who find a 75 to be an unsatisfactory level of achievement.

“We are committed to ensuring that homework and practice activities are used for the development of skills and knowledge and not for grading,” according to BFA’s 2020 PBL Guide for Parents and Students.

Moving all of this new method for measuring student success forward in totally untested waters is challenging.

Editor’s Note:  A sentence was removed here from the original article, as the policy cited was from an outdated BFA Guide.

While the administration believes in the system, many students and parents are not fans of the new system and they have made it known.

Peter Van Vlaanderen (‘20), as a sophomore is already having his academic progress measured on the 0-4 scale.

This seems to be a common thought when it comes to the new system.

“With proper fixes, it could be a good system… I like the idea. It’s got potential,” Van Vlaanderen said.

Van Vlaanderen was then asked about what he thought of Canvas compared to PowerSchool.

Canvas is a computer-based learning management system that BFA has adopted for providing class content, as well as recording and computing “grades” for the new PBL system.

Powerschool is the system BFA has used for years to store and process the “old” 1-100 grades.

“I don’t like Canvas, it’s really confusing. I guess I could get used to it, but instead, PowerSchool is so much simpler because it just shows one grade, whereas in Canvas you have to go to multiple different tabs to (access) grades and that can be a little obnoxious,” Van Vlaanderen said.

The topic of Canvas and how useful it is for measuring learning is controversial.

“I like the fact that you can redo assignments, it’s less pressure,” Van Vlaanderen said.

Nathan Archambault is an English teacher who teaches mostly sophomores, as well as creative writing. His experience with PBL and Canvas:

“It’s certainly been a transition, I’ve been doing traditional grading my entire career, and this is the first year I am shifting into the PBGR system,” Archambault said.

He sees positives and negatives.

”With everything there is a transitional process, but I do find that Canvas is putting me in front of a computer, doing way more data entry then I ever used to do and I’m not sure if that’s a result of it being new to me or whether that’s a result of it just being more data to enter through the Canvas system,” Archambault said.

Using Canvas has an effect on presenting assignments to students, as well as assessing the work done on the assignments.

According to the previously mentioned Guide, “Standards based grading measures how well an individual student is doing in relation to the grade level standard/skill, not the work of other students.” This is another aspect of the new PBL/PBGR system that suggests a fairly radical shift in how grading is done.  In this system, most schools do away with class rank, and they do not have a Valedictorian awarded based on the highest GPA.

Could the old 0-100 system return, even if it does seem to pit one student against another in terms of achievement measured in a class?

“I don’t know, I don’t think that 20 years ago, anybody would have thought that we would be doing what we’re doing now, so I can’t speak to the future,” Warden said.

According to Ms. Warden, if anyone has any questions regarding the VT state mandated switch to a PBL/PBGR system, they should either come see her at her office in the North building, or ask for some videos and presentations that she has available.

The promise contained in the BFA PBGR 2020 Guide for Parents and Students is of “better communication” on what each student knows and is able to do according to the new standards. At this date, two years into the transition, it seems that many students, parents, and teachers feel that this promise has not yet been fulfilled.