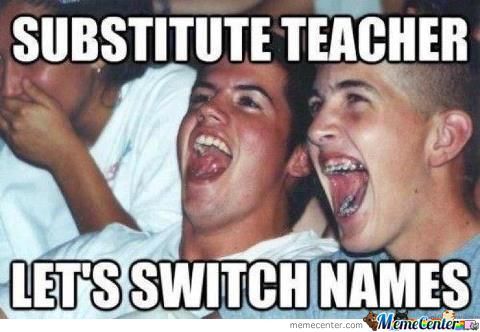 Students absolutely love substitute teachers (subs). It’s a well known fact because that means that students are able to get away with a lot more things, like playing on a cellphone and having to do less class work; it’ll be homework and they can do it then.  Or, it is going to be movie day!

But is BFA facing a substitute shortage, or is that just a rumor blowing in the wind?

“On any given day, we have enough subs, but on certain days we are very short,” Teri Brunelle, the substitute coordinator at BFA, said.

But how many substitute teachers work here at BFA?

“The sub list has probably 20 people on it… they all sub at different schools, so if we don’t get them in advance, they’re already at the other schools for the day or for the week… We average at BFA four subs a day,” Brunelle said.

Four subs a day is a very small number.

“Towards the weekends, we can probably get up to 17 people out, so that makes it kind of hard to find subs. But we’re really great because the faculty steps forward and covers the periods that we can’t cover, so they cover it “in house.” So that means that a teacher will take their prep period and cover for another teacher,” Brunelle said.

Edee McArtor, a teacher in the business department, is an example of a teacher who covers “in house.”

“I’m not absent very often, so it has not impacted me when I do need to be out.  I have offered to substitute for other teachers during my prep periods to help out when I’m available,” McArtor said.

There are a few ideas on how BFA could gain more subs for the classrooms, on top of what is already being done now.

“Maple Run puts an ad in the paper, looking for subs, and we have a job posting called School Spring, where you can submit your application and we try to get them processed as soon as we can so we can get them on our sub list,” Brunelle said, “[but] I think that we should probably have a couple subs that are hired by the District daily… But if we actually had a couple people that were hired by the school district, Maple Run, that only subbed, that would be very helpful because then we’d know somebody that we can depend on every single day, and there is a use for it.”

McArtor suggested a practice that worked at another school:

“In the last school I taught at, we had a general study hall every period in the cafeteria so if they could not find a substitute for a teacher, all of their classes went to the cafeteria to a study hall.  I think this would be a great option if subs are not available.  The study hall teacher might have 20 students that day, or 100, so it got a little crazy sometimes, but at least all students had a place to go,” McArtor said.

BFA would not be the only school facing a substitute problem, assuming that it really did have a shortage in subs.

According to an article in Edweek.org called Substitute-Teacher shortages put schools to test, there is a nationwide substitute problem caused by lack of recruitment and because college students are shying away from “participating” in the education world more than they have to.

There has been a new and futuristic idea that sprung up in Massachusetts, in areas surrounding Boston.

“What Parachute is trying to do is think about how that time that’s wasted and the money that goes with that can be reused to offer high quality learning experiences for students,” the article Forget Substitute Teachers, Parachute Teachers are The Future said.

Parachute teachers are business people or companies who find an interest in teaching others about their profession and what they know, without making them choose between teaching and their current profession.

The parachute teacher would cover for a teacher on an experiment or lesson that coincides with what the students have already learned, or what they will learn in that particular unit.

“I think that it would actually be a wonderful idea, but I don’t know how many of them would be willing to give up their day to come to do this unless it’s in advance- like a really advanced thing… but the only problem with any of that is that you cannot have somebody come in unless they’ve been fingerprinted, and stuff like that. So we’re asking them to do another expense,” Brunelle said.

Who knows what the future will bring for the sub situation.

But with the cold and flu season already among us, it is quite likely that students will be seeing subs in class, on a regular basis.