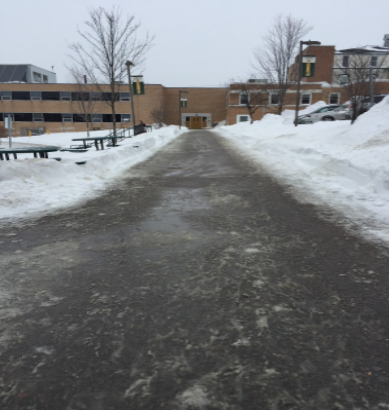 Wet clothes, muddy shoes, soaked floors, and ruined binders are all the results of BFA’s open walkway splitting the North building with the South building.

Connecting the North Building and South Building of the BFA campus is a walkway without a roof or source of protection from the elements that weather can bring.

This gives the faculty and especially the students a miserable and sometimes cold walk to the other building; especially during the cold months of winter.

The BFA administration is well aware of the situation.

“We did an architectural study and we do have plans that may be put in place for voters to vote for its approval,” Principal Chris Mosca said.

The administration has been taking action.

“I kind of recreated these talks about a new walkway. We want this school to be safe so we put in the rugs and the airhogs that suck up the water at the entrances of the school to keep students safe from harm,” Mosca said.
The school has contracted with Arnold & Scangas Architects to develop some preliminary plans. Mr. Scangas has presented the School Board with these plans.

“Quite obviously there is nothing more we can do without starting construction, I fully support the idea of construction and I’ve been trying to push that ball forward,” Mosca said.

The school needs to figure out how to pay for such a project. This involves creating a “school bond.”

School bond elections typically take place under the rules of Proposition 39, which allows districts to sell bonds to build and upgrade schools with the approval of 55 percent of voters, as opposed to the traditional two-thirds. The law allows the district to spend the money on construction, rehabilitation, equipping of school facilities, or the acquisition or lease of real property for school facilities.

“Finances are the biggest question with stuff like this, when the time is right we will come forward with a plan,” Mosca said.

The school is still focusing on the complicated financial aspect of these plans.

“They [the plans] are not ready to be presented yet, because we have not addressed the financial question. We are looking for a bond, and we have to put it up for vote. We aren’t ready and we are not close to being done,” Mosca said.
The plans for the new connecting walkway will bring many new features and upgrades to BFA. New planned features such as a new main office and new main entrance will bring the school a more formal and safe way to enter and exit the school.

“When you think about it this school doesn’t really have a main entrance, so this connector will give us the chance to make a main entrance and office. We will move some of the offices and classrooms to make those rooms part of the center and make the entrance much bigger,” Mosca said.

The new main entrance will also control the traffic in the mornings and afternoons when parents are dropping and picking up their kids.

“We will put a connector between buildings and recenter the buildings so the traffic will be at the front of the building,” Mosca said.

A new walkway would also bring more safety to the school, with students no longer having to walk between buildings after class completely exposed.

“It is a safety issue number one and a health issue number two for all of the faculty and students here at BFA. Everyone is exposed between the buildings,” Geoff Lyons, Assistant Principal, said.

The school wants to make kids safer at school while also keeping them out of the normal harsh weather elements that Vermont can see throughout the year.

A new enclosed walkway, if approved by voters, will bring added comfort and safety to BFA.

“I hope that the walkway will be built in less than 5 years, and I hope that the construction will go smoothly preferably over the summer as to not make a mess of this area during the school year,” Lyons said.