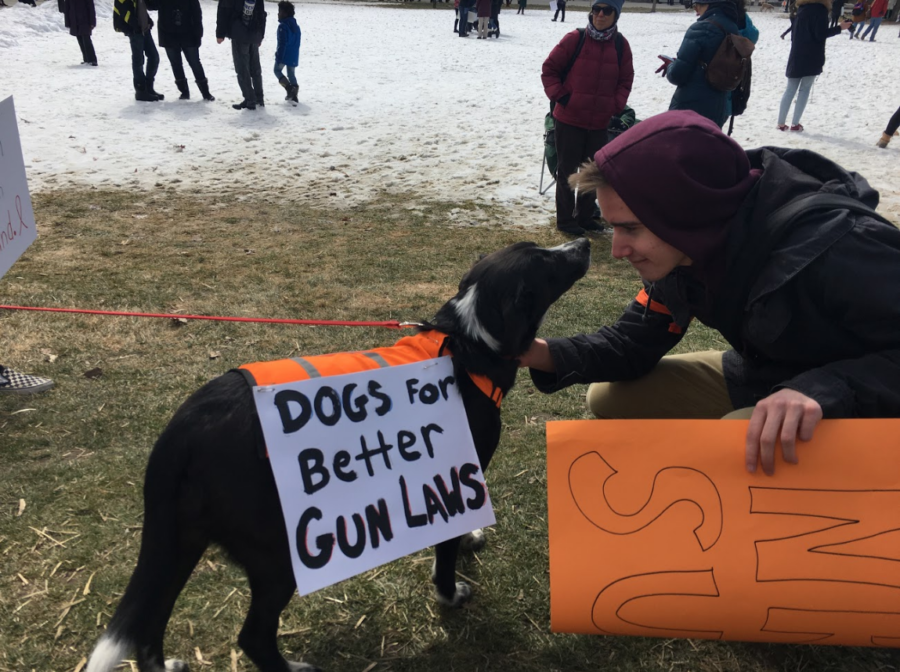 On March 24, a mass of students, teachers and parents visited the capitol building in Montpelier in a national protest for March For Our Lives.

The protest, introduced to society after the events of the recent Parkland and former school shootings such as Sandy Hook, advertises school safety to state and federal lawmakers.

“March For Our Lives is created by, inspired by, and led by students across the country who will no longer risk their lives waiting for someone else to take action to stop the epidemic of mass school shootings that has become all too familiar. In the tragic wake of the seventeen lives brutally cut short in Florida, politicians are telling us that now is not the time to talk about guns.  March For Our Lives believes the time is now… School safety is not a political issue… The mission and focus of March For Our Lives is to demand that a comprehensive and effective bill be immediately brought before Congress to address these gun issues… Every kid in this country now goes to school wondering if this day might be their last,” as defined by the March For Our Lives website.

The March For Our Lives movement made its way closer to home, when an estimated number of 2,000 Vermont youth were brought together to take a stand for school safety. The rally was regarded as a student-driven protest, with student speakers and signs made to project their voice to legislation.

Sophia Venturo (‘18), an attendee of the protest, has strongly voiced her opinion on the subject for the past several weeks. Being one of the students who organized BFA’s own walkout, her personal experiences at BFA have had a large effect on her support for the movement.

“Lockdown and active shooter drills have always been a part of my life because I was born a year after the first mass shooting at a high school, which was Columbine. And so it was just a normal part of my life at school and now that I’m older, I realize that is something that shouldn’t be happening and there needs to be laws passed that should prevent them from happening,” Venturo said.

Venturo’s experiences growing up in a world with monthly lockdown and active shooter drills is something very familiar to other students around the state. Students who attended the march continued to protest beyond just Saturday.

According to VTDigger, Vermont students delivered 1,000 handwritten postcards that were supportive of gun violence prevention to Governor Scott on March 27. Hundreds of the postcards were written by students, in hopes of the governor listening to their opinions.

“I am a Senior at Hartford High School. I have made sure to memorize my twin brother’s schedule in case something happens and I must reach him. School is not a battleground. I shouldn’t have to live like this. I NEED YOUR HELP,” read one of the postcards.

Looking back at the march in Montpelier, Venturo regarded Lonna Neidig (‘18), as a speaker that she felt connected to, as Neidig wrote a poem about the threat that was made towards BFA in February that resulted in a full school evacuation.

The poem highlights Neidig’s concerns and how she felt and currently feels about events that happened to her throughout her time in BFA. An excerpt from the poem:

i agreed with friends

we didn’t have rides,

but they had their phone.

my old boss asked what was happening.

i remember the fear.

“i had to get the preschoolers out.”

a friend texted me.

“i thought about how i could shield them

if there were shots fired.”

my school wasn’t the only school.

who went into lockdown

in the previous two days.

i shouldn’t have to establish a web of

“did everyone make it home alright?”

i texted my team

“if you have nowhere to go and this happens again,

go to my mom’s workplace.”

i’m telling everyone around me to stay safe,

the police said everything is clear,

but part of me is still scared.

i don’t want to go back,

but i have to.

After Neidig’s experience at the march, she feels that students were able to get the attention of Vermont lawmakers, and get some support on the issue she feels so strongly about.

“Congressman Peter Welch and Senator Bernie Sanders showed up and talked with all of the presenters.  There were several other legislators, specifically state level, that showed up to listen to us. They definitely have been listening.  Following the rally, there was a sharp decline in civilians reaching out to their legislators asking for them to [increase the] support [of] the S.55 bill, and they noticed this, so it’s not like they are tuning us out and forgetting about us and our message,” Neidig said.

The actions of legislators after protests and marches, such as the March For Our Lives movement, is an important thing to watch for, for students like Neidig and Venturo. Many young people have the mindset that their voice won’t be heard in politics, and with the actions of Vermont legislators, it promotes political activism among youth.

According to The Hill, Jeff Foster, an AP United States Government and Politics teacher at Stoneman Douglas, taught a lesson about special interest groups on the day of the shooting. Some of the interest groups he taught about include the NAACP and the NRA.

The teacher spoke about how politicians and the NRA respond to mass shootings and the loss of attention shortly after shootings occur. Many believe that after this lesson, this is what sparked much of what Emma González said during her memorable 11 minute speech about gun control.

Donald Tinney, an English teacher at BFA, attended the march in Montpelier, in support of the student-lead movement. With the sign that he created, he promoted life, liberty and the pursuit of happiness for his students.

Tinney didn’t seem to be surprised by the effect that Foster’s class plan had on the movement, and was proud of the effect that teachers have on their students towards this issue.

Whether students realize it or not, teachers have an undeniable effect on their way of life and the way that they act. With a movement like this, it seems to be more important than ever to take heed of what teachers say, and to put it in action, however the students see fit.

The March For Our Lives movement is pushed by the young generation today. High schoolers all across the country are taking a stand, and are learning the importance of political activism.

Tinney is a proud supporter of the movement and the message that it sends to people in America. The issue of school safety is something he is passionate about as well, as the safety and well-being of his students remains to be his number one priority as a teacher at BFA.