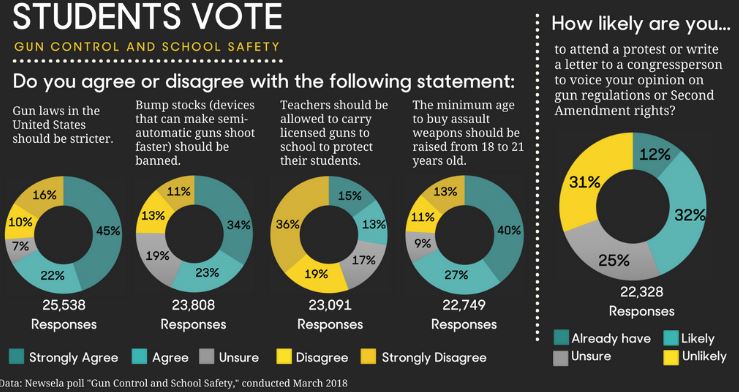 Last month, Newsela conducted a poll that reached over 25,000 students across the country. 3,500 schools from every state, including Washington D.C., participated, ending in well-thought out and meaningful poll results.

Newsela is a news outlet for current events stories that is specifically made for the classroom. Many schools find this useful, as it offers articles that can be changed from a 5th grade reading level to a high school reading level all for the same article.

Within Newsela’s poll, they found that a majority of students supported proposed gun control measures, with only 24 percent of students not support the measures.

It’s possible that the recent trend in school shootings has had an effect on the opinions of current day high school students. These shootings could leave students feeling unsafe in an environment that is meant for learning and understanding, rather than fear and anxiety.

Despite the 19 percent remaining unsure, still over half of students agreed with the statement, which is telling about the impact of the March For Our Lives movement on student lives today.

“Teachers should be allowed to carry licensed guns to school to protect their students,” reads the third question.

With a majority of students feeling that gun control laws should be stricter, they could feel that putting more guns into the school system would, instead of making them feel safer, result in more possibilities of being harmed at school.

However, 28 percent of students still feel that giving guns to teachers would give the chance for more protection, and decrease the likelihood of mass shootings taking place within the school systems.

“The minimum age to buy assault weapons should be raised from 18 to 21 years old,” stated the fourth question.

However, the other 24 percent could feel that 18 is the necessary age to be able to purchase an assault weapon. Other actions, like buying cigarettes, voting, and getting a tattoo, are all allowed for 18 year olds to do. Some might feel that purchasing assault weapons fits into this category.

With a controversial topic like this one, it’s more important than ever to be able to voice an opinion, whether it be through protest, letter, or another mode.

Overall, the Newsela poll seemed to reveal that a large majority of students are ready for a change in gun control laws within the government, and many of those students are willing to do something themselves to make a difference.

With it being almost two months after the shooting at Stoneman Douglas High School, the March For Our Lives movement isn’t giving any indication of slowing down, and students continue to be more passionate than ever about the topic of gun control.