Everything wrong with “Walk Up, Not Out” 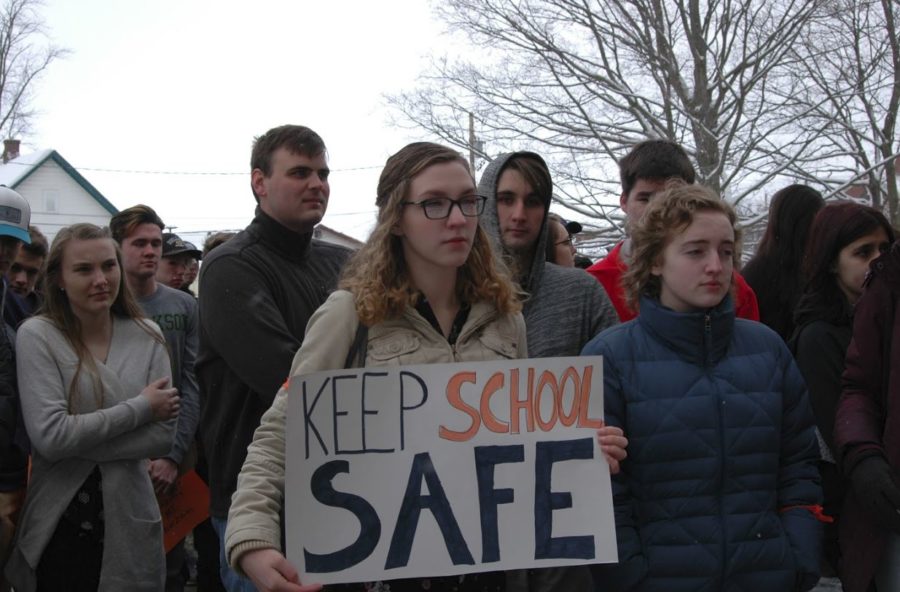 As an argument against the Student Walk Out, which occurred on March 14 across the country, many people have been posting on social media that students should “Walk Up, Not Out.”

The Student Walk Out took place to honor the lives of those who were tragically killed in Parkland, Florida, as well as to promote gun control and gun safety. Walk Up, Not Out asks students to find 14 students and three adults to say something nice to. It also implies that being nice to someone can solve mental illness and decrease gun violence. This counter-movement suggests that Walking Out would not accomplish anything.

This protest to the Student Walk Out not only blames victims of school shootings, but it asks students to make friends with potentially abusive people.

Karla Kane, a math teacher at BFA, created a movement called “What’s Your 17 BFA” that enforces kindness and positivity.

“It is a movement designed to create some positivity at BFA. It is designed to get students and staff to try and think of things that they could do to make BFA a more positive place and to improve the experience for other staff members and students,” Kane said.

Geoff Lyons, one of the assistant principals at BFA, supports the spread of positivity, as well as the Student Walk Out.

Lyons shared his perspective on the BFA originated movement.

“I think [What’s Your 17 BFA] is a very positive means to affect change, to have people have conversation and talk about what’s going on at BFA. It allows kids and adults to have deeper conversation about the issues. And, it’s very positive; when you read those messages, they’re very uplifting, they’re caring, and make students feel better about themselves, and staff,” Lyons said.

What’s Your 17 BFA is not the same as Walk Up, Not Out. Kane was inspired by the idea to make BFA more positive, so she created a movement she thought would make a difference.
Kane hopes to raise more awareness for this movement in the student population. Many members of the staff have participated in posting on the Facebook page, Instagram page, and promoting positivity.

Kane also thinks that although promoting kindness and positivity is always needed, it will not change the amount of gun violence in the United States.

“I don’t necessarily think that it should be Walk Up, Not Out, because the two things are distantly related. Like, I never think that having more kindness in the world is a bad thing, but I don’t know that walking up to people instead of walking out is going to make a difference in terms of school shootings necessarily. But, it may make a difference in terms of the positive atmosphere of the school and how kids feel about themselves and feel about school,” Kane said.

The contrast between What’s Your 17 BFA and Walk Up, Not Out is the assumptions made by supporters of Walk Up, Not Out. Although students and staff have the ability to improve the amount of kindness spread throughout the school, they are not expected to make friends with abusers.

In order to show the purpose of What’s Your 17 BFA, many members of the staff participated in painting the school bathroom stalls with inspirational and positive quotes. Many students were pleasantly surprised by the joyful paintings. Kane hopes this will inspire students to pass on the optimism.

“I don’t know if it’s had a huge impact thus far. I think a lot of students liked the painting in the bathrooms; I think they thought that it kind of brightened up the place. The more times people see positive and inspirational messages, the more likely those messages are to make a difference,” Kane said.

Lyons shared his perspective on the BFA Walk Out and what it meant in his eyes.

“I was in favor of the Walk Out. Something like that- student led, student run- allows student voices to be heard and conversations had by everybody, students and adults, discussing the issues at hand. Our group focused on safety, and that’s an ongoing conversation here at BFA, [along with] wanting to know how to do a better job working with the students and adults to make BFA and the [NWTC] as safe as possible,” Lyons said.

The Student Walk Out was performed safely and allowed students to get their messages and emotions across.

Walk Up, Not Out implies the Student Walk Out will not make a difference. However, Americans have been making a difference through peaceful protest and freedom of speech for 242 years.

On Feb. 1, 1960, four African American students sat at a white-only bar in Woolworth’s, a store in Greensboro, North Carolina. The students were given threats and were harassed but they refused to move from their seats as a protest for Civil Rights in America. Regardless of the hate they received, the students remained at the seats until they were served.

In 1993, more than 800,000 people participated in the March on Washington for Gay, Lesbian, and Bi Equal Rights and Liberation. These people marched for laws against discrimination of sexual orientation. This march also fought for increased research of AIDS. Since this march, gay marriage was legalized in 2015, and there has been more study and research for the cure for AIDS.

These people could have been told to ignore what they believe in, however they fought and they accomplished what they wanted.

Walk Up, Not Out asks students to disregard their feelings on or about gun control and violence.

Walk Up, Not Out asks students to make friends with people who have the potential to hurt them.

Walk Up, Not Out implies that students cannot make a difference when they are fighting for something they believe in.