Maple Run: what have they done? 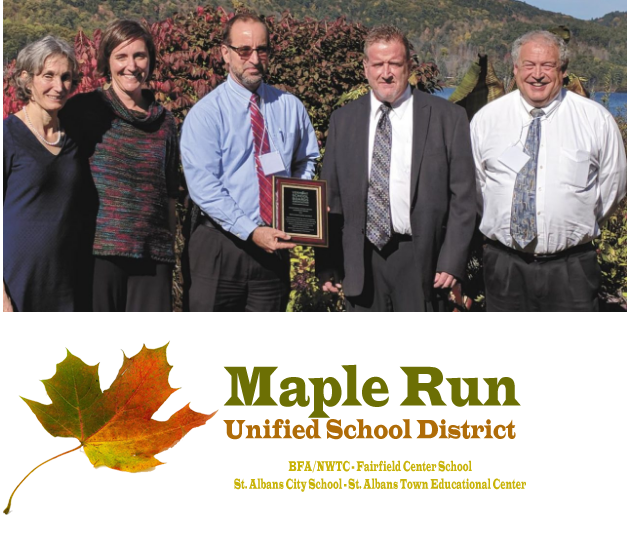 Running a school board is like cooking a large meal; however, preparing for four separate schools with four different chefs was spoiling the food. Before 2017, it seemed there were too many cooks in the Franklin Northeast Supervisory kitchen with each of the five school boards, so the school system had to make a change.

The Franklin County School system has finally found a way to come together and make a more cohesive school district.

Before consolidating to form the Maple Run Unified School District Board in 2017, every school in the area had their own school board. St. Albans City School, St. Albans Town Educational Center, Fairfield Center School, and Bellows Free Academy each had a separate school board, as well as an overseeing Franklin Central Supervisory Union Board.

When parents and citizens first heard about the combining of all of the boards into one unified board, they didn’t understand how it would improve the lives of students.

Act 46 was first introduced by the Vermont Legislature in 2015. Act 46 is “an act relating to making amendments to education funding, education spending, and education governance.”

According to VTDigger, Act 46 was created in order to form “…larger, more cost-effective systems that better serve students.” VTDigger also explains that tax rates and education spending have continued to grow, even though Vermont’s public school system has lost about 24,000 students since 1997. Teacher to student ratios have remained about the same.

The Maple Run Unified School District Board was created under Act 46 in order to benefit students’ education.

Superintendent Kevin Dirth took his position in 2014 and continues to be the Superintendent of the school districts, now unified as the Maple Run Unified School District.

Dirth explained how the Maple Run Unified School District Board is more efficient than the previous school boards.

“For one, when you had five separate boards, it was really hard to get them all to agree to something and to work as a unit because everyone has their own opinions… so instead of five boards with five or more meetings a month… now you have one board that meets twice a month and they’re all just working with all the schools. So it’s more efficient in time, less board members. They’re all working together so that a Fairfield student is going to have the same opportunities as a [SACS] student,” Dirth said.

Shannon Warden, the Assistant Principal for Curriculum at BFA, offered her perspective on the changes between the BFA School Board and the Maple Run Unified School District Board.

“I attended very few of the Franklin Central Board [meetings], it was Mr. [Chris] Mosca who attended those. I would say the biggest thing, that I already mentioned, was that BFA had committees that met and they were smaller subsets of the larger board that met around specific topics that then informed the larger board. That doesn’t happen anymore with the Maple Run board; they discuss all matters that come before the board. I would say that’s the biggest change, and I cannot speak to what the biggest changes are between the FCSU board and the Maple Run board,” Warden said.

The unified board has benefitted students through saving money, offering more opportunities, and trying to give students the education that will benefit them most, which is what Act 46 hoped to do.

Some examples of improvements the Maple Run Unified School District Board has made since consolidating include: changing from renting the Maple Run property for offices to owning it, moving the Early Childhood Program into the Maple Run building, hiring French teacher Bruce Pollard to work at both Fairfield and BFA, and strengthening the Student Transfer Process.

Bruce Pollard is an educator who teaches at two schools under the Maple Run board. Having Pollard work at BFA and Fairfield gives Fairfield students the opportunity to learn a language that they didn’t have before.  Because there was not a 100% position available at BFA, it also let Pollard combine a 60% position with a 40% position, which was not possible before the consolidation.

“For instance, one thing the new board found out that in both [SACS] and [SATEC] there’s a good foreign language program. [SACS] did it through [an online course called Middlebury Interactive], [SATEC] had their own teacher, and Fairfield had nothing. So when everybody got together, they noticed that, they thought ‘wait this isn’t equitable.’ So within the merged district, we were able to work in a high school teacher, Mr. [Bruce] Pollard and decided we would have Mr. Pollard at BFA for 60 percent of the time, and put him at Fairfield [for 40 percent of the time],” Dirth said.

A similar split position will be implemented in the 2018-2019 school year with a district-wide string orchestra teacher. This teacher will spend time at each of the schools, while mainly focusing on the elementary and middle schools to prepare students to play string instruments for when they go to high school.

The Maple Run Unified School District Board generated the Student Transfer Process in order to give students an opportunity to have the best learning environment within good reason for that student.

“The Maple Run Board has done this really neat thing which they call ‘Student Transfer Process’… [For example] if a person at [SACS] really didn’t like [SACS] and the parents wanted the student to go to [SATEC]; we have a process, a lottery, every year that allows people to apply if they have a really good reason they want to get out of [SACS], for instance, and they’ll be able to go to [SATEC]. That could never happen before because they were separate schools and districts,” Dirth said.

Although Dirth explained that there aren’t too many issues or conflicts with the Maple Run Board, he mentioned that some parents and faculty have the mindset that they don’t want to create a larger board.

“It’s also just changing a mindset. If you’re a parent or teacher at Fairfield, that mindset was always Fairfield and what’s best for Fairfield. It takes a little time to make that change to whatever is good for those kids in Fairfield, it’s also good for BFA students, and also good for the [SATEC] students. So it’s thinking bigger and broader,” Dirth said.

Dirth and Warden both agreed on the goal of the Maple Run Unified School District board; to make education within the schools more equitable.

“The whole issue is what I call equity [the quality of being fair and impartial]. Because there was a little bit of lack of equity when you had separate boards all doing their own thing. Necessarily, one school might have more or less than another school. Now that we’re one, the board is looking at everybody and making sure that everything is equitable,” Dirth said.

Warden mentioned how hard the Maple Run board has worked to make sure all of the schools are equitable and have fair opportunities.

The Maple Run board has been successful in its consolidation thus far. This district was one of the first to consolidate, and Superintendent Dirth has received great feedback for the board’s work.

“We’re actually a leader in that we were one of the first that merged and if you keep up with it you know about one third of the state is fighting it tooth-and-nail because they don’t want to do it. So we have kept very faithful to [Act 46] throughout and we’re actually getting people calling us and asking ‘how do you do this’ and ‘how do you do that.’ The State Agency of Education actually tells people ‘call Maple Run, they’ve done it before,’” Dirth said.

The Maple Run board has a five-year plan, which they are on the second year of implementing. The main plans for the 2016-2017 year were for developing a communications plan, creating a district-wide calendar, creating a mission for the board, creating the Student Transfer Process, as well as making a basis for future plans.

The 2017-2018 work included implementing these plans, as well as discussing equity, considering a bond for March 2018, and discussing the hiring process.

During the 2018-2019 school year, the Maple Run Unified School District Board plans to complete a technology study, implement an evaluation process, and implement the further development of previous plans.