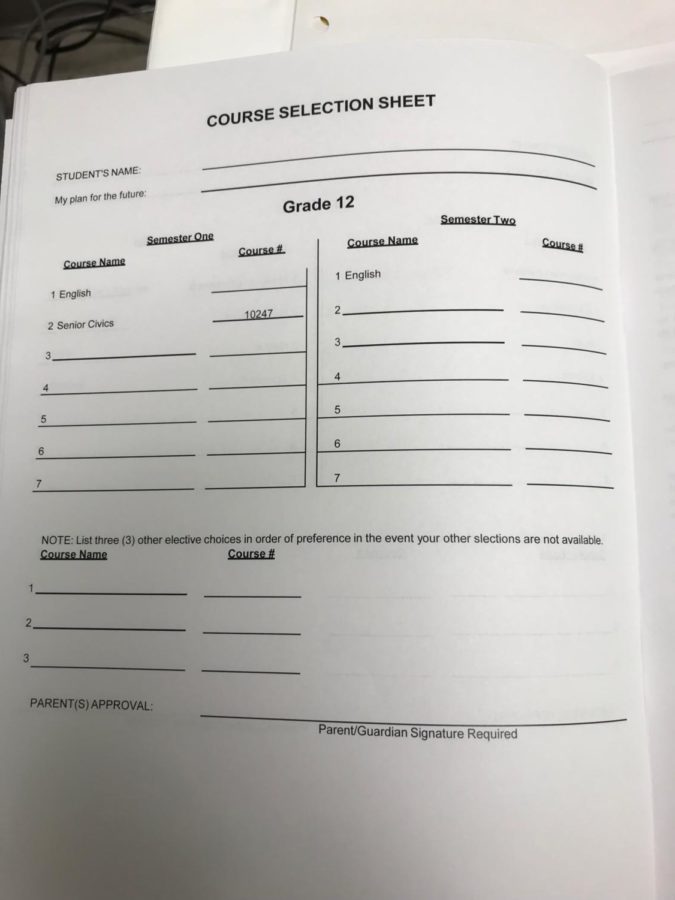 When the student schedules came out last June, many students were confused to find that many of their AP course requests were not met.

Thinking they simply had to move around a few classes, students met with their counselors only to find out that there were five different classes, many of which only offered once a day, all in the first two periods of the school day. These five classes include: AP Chemistry, AP Government and Politics, AP Literature and Composition, AP Biology, and AP Physics.

One of these classes, AP Literature and Composition, is offered second and fifth period, however many important other classes are fifth period, including many Northwest Technical Center classes.

If students were to sign up for two or three of these classes, they would have to choose only one instead, even though they may have the academic skills to handle the rigor to participate in those classes.

For example, if a student desired to take AP Government and Politics as well as AP Biology, which are only offered once a day, the student would have to choose which one they prefer. If they did not want to choose one class over the other, they could take a class online or participate in a dual enrollment course at Community College of Vermont or a different college.

Another issue is that many students use AP classes as a way to get college credit to use once in college.

According to the College Board website, AP classes can make students stand out on college applications, help students earn college credit, skip introductory classes in college, and build academic skills for college classes.

Preston Randall, BFA Director of Guidance, spoke on the scheduling issue, saying that there is a long process in order to determine which classes are which periods, beginning with course requests.

Melissa Hayden-Raley, employee in the IT (Internet Technology) Department at BFA offers the first step to the process.

“The very first step, [is] actually the development of the course catalog. In the late fall, the department chairs start to think about what courses [they] want to offer next year and what courses [they] want to pull off the table. So departments will often float two or three additional courses that they are interested in and that they hope students are also interested in, that then may or may not run based on the requests,” Hayden-Raley said.After the development of the course catalog, students meet with their counselors in January and February in order to determine which classes they would like to take. These requests are placed in PowerSchool, which is then sent to the department heads.

The next step is to ensure that each teacher gets one even and one odd preparation period. This alters when each class will be taught and which teachers will teach which periods. This is a contractual obligation that cannot be changed.

“All of that information then goes to Melissa [Hayden-Raley] and she does magic with it. I think what happens is, depending on the year, they plug in the information to see ‘does this get the most students satisfied, what percentage of the students does it [satisfy]?’, knowing we’re never going to hit 100 percent, but wanting to get more than 13 percent. Then, Melissa [Hayden-Raley] tweaks it and makes a few adjustments. Then, Melissa [Hayden-Raley] gets reports that say ‘here’s where the conflicts were’. So then she is able to say, ‘okay, so this looks like it isn’t working for all of the students who want to take Underwater Basket Weaving, so let’s move Underwater Basket Weaving to [a different period],” Randall said.

Once the process is finished, students are placed in sections of classes, sometimes ones they didn’t want or sign up for. For example, if there was a gap in the student’s schedule, it is the job of the counselor to decide what the student will like best. Students then receive their schedules and can meet with their guidance counselors to make changes.

Randall and Hayden-Raley both mentioned that the system isn’t perfect; it is about an 80 percent satisfaction rate.

Randall and Hayden-Raley also hope to improve the system for the next school year.

“So one of the things we’re going to look at doing this year is trying to give PowerSchool more information in requests about which courses really matter to you when it tries to run all of those different scenarios,” Hayden-Raley said.

Tyler Sears (’19) is a student who wanted to take multiple AP classes but couldn’t due to the scheduling conflicts.

“I planned on taking AP GoPo (also known as Government and Politics), but, as I understand it, GoPo and nearly all of the AP science courses took place during second period. To my knowledge, the only exception is AP Environmental Science,” Sears said.

Sears mentioned that although he did not like having to make decisions between AP classes, he ultimately knew that he would choose science over social studies because science is his bigger passion.

According to CNBC, taking multiple AP classes helps many students in the future with paying for college. Each AP exam costs around 100 dollars, and if the students receive credit on the exam, they typically earn three credits, making up for a course that costs 1,800 dollars to 3,000 dollars.

“Rather than AP GoPo, I’ve been placed in Senior Civics. My biggest grievance, as the class relates to my future, is that I will not be able to transfer any credits into my college career. While giving me the opportunity to take a different class in college, this exchange will also cost several thousand dollars,” Sears said.

An 80 percent satisfaction rate equals success in the eyes of BFA administration, however if you were to ask a student who tried to get an AP class and was denied, this may not be the case.