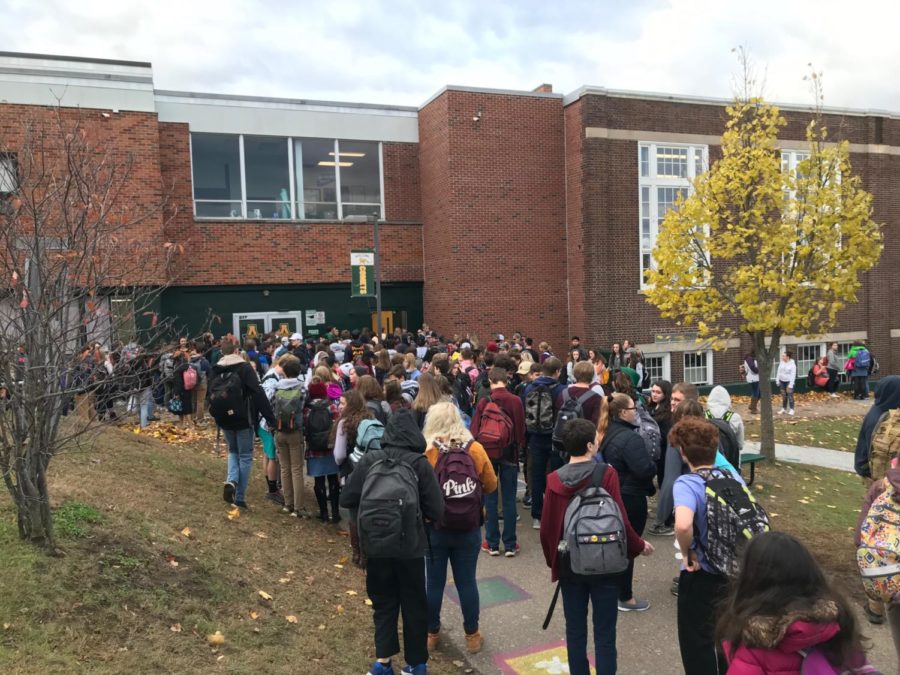 As of Nov. 5, 2018, students are not allowed in the South Building on Tuesdays and Wednesdays before 8:05. Another provision made is that there is only one entrance unlocked in the North Building, which is the main entrance to that building.

This implementation may have resulted due to an incident that occurred on Oct. 16, 2018, in which a parent was harassing a student, not her own child, on the first floor of the South Building. After refusing to leave, Officer French arrested her.

This action was also created in order to provide greater safety at BFA in a time where school safety is extremely necessary.

However, if school safety is the reason for this establishment, isn’t it more dangerous to have the students standing outside, waiting for the doors to open?

Students waiting outside for a longer period of time could expose them to weather conditions. According to The Old Farmer’s Almanac, there is going to be above-normal precipitation this late fall and winter, and the coldest periods will occur from late December to mid and late January. Students arriving at school during these months will have to wait outside or go into the North building during these weather conditions.

Some parents have to drop off their students early because of their work schedule. It is difficult for parents to adjust their schedules based on this new implementation.

Opening the doors at 8:05 could also make students late to class because school starts at 8:10.

Students waiting outside could also be put in danger in the case of a threat. For example, if the threat BFA received on Feb. 21, 2018 occurred this year when students were waiting outside, they would not be safe. If anyone with a weapon or with the intent to hurt someone showed up, those students would be in danger.

According to Chris Mosca, BFA Principal, another main factor of the change, besides safety, was to keep students from distracting teachers during their collaboration time.

¨I don’t know that students can fully understand or appreciate that time between 7:30 and 8:00, [which is] necessary for teachers to work together. It’s built into our schedule, and our students may not think that it’s that big of a deal because there are no classes going on. I don’t think anybody is being intentionally disrespectful for the most part, I don’t think that’s it. There were some concerns that were expressed about students being in the hallways and maybe trying to get teachers’ attention, even for help or support, when the teachers really need to be meeting with each other. And then the help and support, quite obviously, can come through Enrichment,” Mosca said.

Mosca added that although it may provide inconvenience, he believes students will be safer this way.

The solution to the problem of safety has been talked about for multiple years: a connector between the buildings. Over the course of several years, students have been discussing how they want a connector in order to protect them from weather conditions. In recent years, the connector is needed for safety.

¨The best answer to all of it, frankly, would be to build that connector [between buildings] and have a centralized, single entrance [in the connector]. So that’s the goal, and then all of this goes away. We are trying to secure 34 doors, we pass openly. There are many flaws with the design of this building. And we can take these kind of measures to help a little or hopefully reduce the risk. But as long as we’re in this wide open situation, it becomes very, very difficult,” Mosca said.

The connector has not yet been built due to the high cost, however it is now necessary to provide added student safety against outside threats.

“But the hope is to have the bond for the connector meeting. The school district will borrow money to build it, because it’s a rather expensive project, it’s over five million dollars. Ideally, if we can do that, and we get the approval in March, which is when it’s hopefully going to be presented to voters, the building could start,” Mosca said.

Another large problem on Tuesdays and Wednesdays is supervision. Although Mrs. Ellen Gissel is in the cafeteria, and the librarians are in the library, everywhere else in the school is left unsupervised because the teachers are in collaboration meetings. This is a large reason why students weren’t allowed in the South Building in the first place. Before Nov. 5, students let into the South Building at 8:00 a.m. were largely unsupervised; all teachers were in collaboration meetings and very few administration were actually in that building.

“What do I think about it? I’m not sure I have much of an opinion on it other than I want to make sure students are warm and dry and safe. My understanding is that the warmth and the safety is provided in the North Building, like in the cafeteria or library or wherever. As long as students are taken care of,” Bedell said.

Bedell mentioned that the main reasoning behind changing the times was safety. When asked about the disruption during collaboration time, he said that it didn’t really affect his department.

“My department collaborates in, kind of, out-of-the-way places, just because of where our classrooms are located. So we’re not really bothered by it; we’re either here in my room or we’re down in the social studies office. So by the time students end up out here, it’s only a few, and we don’t really hear like a surge of people,” Bedell said.

Richard Berthiaume, department head of mathematics, agreed that student safety is the most important.

“It’s unfortunate that we live in a time where safety is so important for our kids. And having kids going around unsupervised is something that was a concern when teachers were in collaboration and meetings and weren’t able to supervise,” Berthiaume said.

Mosca mentioned that although efforts are being made to make BFA safer, there are still many flaws.

“It was good to at least try it to see what it looks like, and if there’s flaws then we can always change it back. We have to be pragmatic. The issue really is that it’s so hard to keep these two buildings secure with 34 entrances and exits. Even if that all works flawlessly, we pass kids between these buildings seven times a day, and it’s wide open. People who want to do harm can sneak in. It’s not that difficult because we have to allow kids to pass, you know, we can’t send you in a tube from one building to another,” Mosca said.

Mosca says that although administration tries to provide as much supervision as possible, it often becomes difficult because of how the school is set up, as well as how many students attend BFA.

“We have the school resource officer, we have the dean of students, we have the school administrators, and we all try to be around for supervision. There is only so much space we can cover at any given time. It’s hard because we have 850 kids and two huge buildings. So we have people available in the event that there is something going on and we can address it,” Mosca said.

One of the biggest grievances for students is being late to class. In my own experience, on Nov. 13, 2018, nearly the entire third period gym class missed the bus to the Collins Perley Complex. Because students weren’t allowed in the building until 8:05 a.m., the announcement was not made until right before the bus was leaving, therefore only four students from the unit I was in actually made it onto the bus.

Several students also expressed concern about being clumped outside before school starts on Tuesdays and Wednesdays. Mosca delivered his response.

“As a result of that, we could possibly just move it back to the way it was. Seriously, but you don’t know until you try it and you see it. If you see kids together like that, and some folks told me it might make them late too. So, you know, we tried something and if it doesn’t work we can change it back,” Mosca said.

Mosca says that being late to class is a “little bit of inconvenience,” however if students receive a unexcused tardy to class, they will be punished.

According to the 2018-2019 Student Handbook, an unexcused tardy to a class, meaning the student is less than ten minutes late, results in a detention imposed by the teacher. If a student has two unexcused tardies, administration can give them a detention. This isn’t just a minor inconvenience when students have to suffer.

Although Principal Mosca claims these new policies will make BFA safer, from the student viewpoint, they can’t tell yet if they are helping.