Only fools juul in school 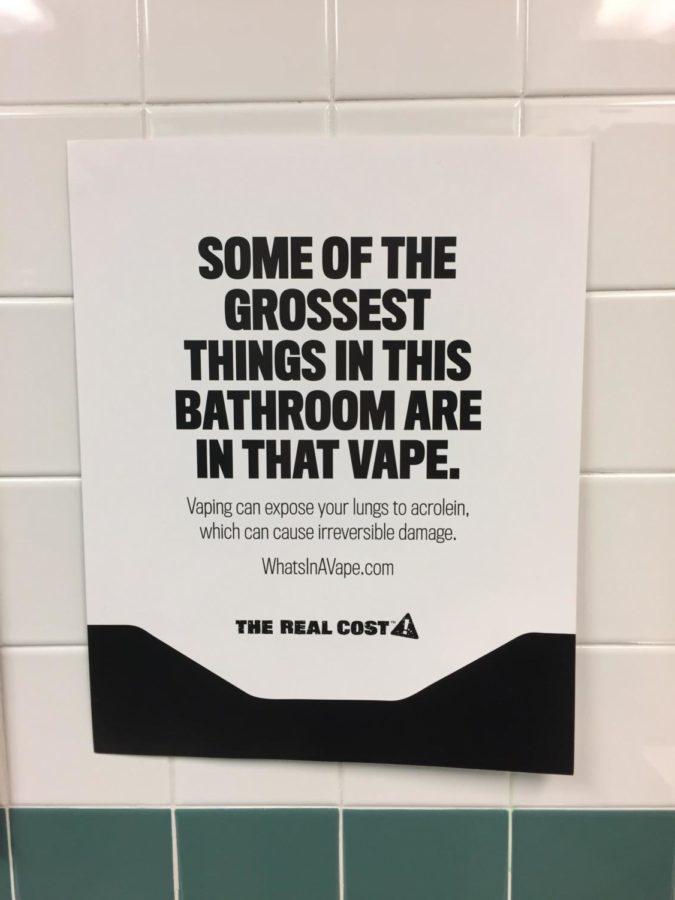 Using prohibited and risky e-cigarettes is part of the many students’ everyday life. E-cigarettes aren’t just repudiated alternatives for obstinate chainsmokers anymore, they have become a dangerous trend among the “cool” reckless youth.

Two out of 78 students who took part in a poll for this article, stated that they don’t think there are any health risks going along with the consumption of e-cigarettes. Only four answered they don’t know or never thought about this.

Meanwhile, at least 75% of the population at BFA and NWTC have used an e-cigarette this school year, according to the school’s officer David French.

“Every single day I deal with students using e-cigarettes. I am finding the product on their person, backpack, or locker. I am seeing behavior that matches e-cigarette use which include; frequent trips to restroom or locker, exhaling in shirt sleeves or jackets, and using the product when the teachers looks away for a moment. All of these occurrences are being reported and monitored very closely,” French said.

That means that students commit a criminal offense every day, even the ones who already turned 18 and would technically be allowed to use tobacco products, which is what an e-cigarette is classified as.

“It is prohibited for anyone of any age to have tobacco products on public school campuses. If someone under the age of 18 is found with tobacco products they are given a ticket, much like a speeding ticket, and fined $25 for the first offense. My goal is not to find as many civil infractions and write tickets, my goal is to prevent students from putting harmful chemicals into their body,” French said.

Those who don’t care about the consequences of a negative record, which can be a loss of job and study opportunities, should still cast an eye on something maybe even more important: their health.

As already mentioned, most of the students say they know about the health risks, but to make sure that’s really the case and for the sake of completeness, this also has to be part of this article.

Especially -but not only- the pens that contain nicotine are dangerous for the human body. Just some of the physical diseases can be “increased heart beat causing cardiac arrhythmia, trouble breathing and lung damage, even without the toxins of cigarettes, acid reflux disease and insulin resistance,” French said and added that  “tobacco is linked to 3 out of the 4 diseases that kill more Americans than anything else. A user has a more likelihood of dying from a disease than a vehicle accident.”

For young people nicotine can cause serious cell damage in their brain matter, which doesn’t stop developing at least until the mid 20s. This leads to several health issues including cognitive, perceptual, physical and behavioral/emotional impairment. Symptoms like memory loss, paralysis, seizures, loss of consciousness, extreme fatigue, and depression can occur many years after the consumption.

The U.S. Department of Health and Human Service warns about the impact these devices can have on the still developing body.

“Besides nicotine, e-cigarettes can contain harmful and potentially harmful ingredients, including: ultrafine particles that can be inhaled deep into the lungs, flavorants such as diacetyl, a chemical linked to serious lung disease, volatile organic compounds, heavy metals, such as nickel, tin, and lead. Users risk exposing their respiratory systems to potentially harmful chemicals in e-cigarettes,” they write on their website Know the Risks.

“The nicotine levels aren’t regulated so one pod can equal 20 cigarettes. A student doing that may not realize they are smoking a whole pack of cigarettes, and they think it’s just juice or flavor,” Lipka said.

This can result in an overdose of nicotine what isn’t the aspired fun factor anymore. The drug rehab center Passages Malibu describes the occurring symptoms.

“Common digestive symptoms of nicotine overdose include stomach pains or nausea, resulting in either diarrhea or vomiting. Nicotine addicted individuals may also feel light-headed and confused during an overdose, or have extreme headaches and experience vision or hearing problems. Some nicotine users also experience racing heart and accompanying chest pains,” Passages Malibu said on their website.

However, the main risks are the mental effects such a drug can have.

“Most students don’t realize what addiction is and what it can do to you. It will alter your emotions and what you do throughout the day because your body will be craving that. It’s an actual addiction which is a disease. Not everyone uses it regularly. The problem is, it’s so highly addictive they may not realize they are needing it more and more and more. And then they are hooked. Their brain is still developing so they can be addicted to something quicker and easier than adults. That can lead to other addictions easier, especially when you do it when you are young. It can be a gateway to other drugs,” Lipka said.

Of course, the big producers are taking advantage of this- they see the perfect consumers in the youth.

If you look at all these facts, you must think there has to be some tremendous reason for students using these extremely unhealthy and highly addictive e-cigarettes increasingly.

Both French and Lipka mainly look for peer pressure aspect. This was confirmed by a lot of students on the anonymous survey too.

“I think it’s to fit in, to be cool, to be accepted, to be part of a group more than anything and to try something new and maybe do something that is a little risky,” Lipka said.

Additionally these convenient devices, unlike “real” cigarettes, don’t seem like little murderers: furthermore they even taste similar to your favorite fruit or treat, what makes them more deceptive and unfortunately appealing. Liam DeGraff (‘21), who currently attends BFA, knows about this deceptive trap.

“The reason why people do it is not only because of  the peer pressure aspect. I think that the flavors are also a big thing. A lot of kids are like oh I have this cool mango flavor. It’s a fun crutch for kids. If it didn’t taste good when you inhale it, it would be less of a kind of crutch,” DeGraff said.

He guesses that “a lot of the way they are getting them is probably through older kids. It’s easy to go like hey could you get it offline for me.”

Another group that shouldn’t be forgotten, is the one that exploits e-cigarettes for a completely different reason.

“Some of them are using it actually for treatment maybe for depression or anxiety. It’s a substance which may alter their sense of being and it can make them calm down.They are using it – not knowingly- to help them get through the day,” Lipka said.

This is against medical advice and not an appropriate way to try to medicate mental diseases.

Either way, you should get professional help and support when you have any questions, concerns or you notice that e-cigarettes and/ or other drugs play a role in your life.

And for those who choose not to use e-cigarettes:  in a couple of years, you will be happy and proud that you didn’t put your life at risk just because toxic clouds were trendy and the word cool unfortunately rhymed on juul.