A new priority: the writing prompt 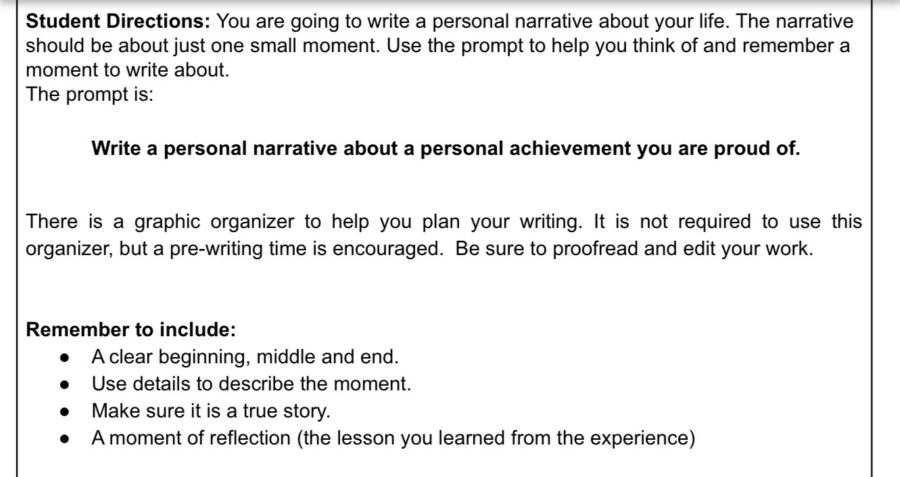 The Maple Run Unified School District has implemented a new writing prompt, which was administered to freshmen at BFA on Dec. 5. The stated purpose is that this new effort will measure growth throughout elementary, middle, and high school.

This writing prompt will take place three times a year during advisory, and there will be three different prompts. This effort started with freshmen this year, and next year will include both tenth and ninth graders, and the following year will be everyone but seniors. The following year everyone at BFA will be completing these.

The writing prompt taken on Dec. 5 by the freshmen of BFA asked “Write a personal narrative about a personal achievement you are proud of.” This is similar to a prompt one would see on a college essay.

Shannon Warden, Assistant Principal of Curriculum at BFA, played a large role in the creation and implementation of this new writing prompt. Warden described the different types of writing prompts students will have to take.

“One area that we will get is personal narrative, and that’s similar to what you would see on, like a college essay. That was done strategically to get students thinking about [college essays], and give them practice with that type of writing because that type of writing does have a clear application and purpose, beyond the classroom. Like that’s a real skill that you then used, and sometimes when you go and apply for jobs, they’ll ask you to write something or answer some questions, so that’s kind of important. [Another prompt is] informational, and then opinion or argumentative; you know, so can you argue something one way or the other and provide supporting evidence and be able to see the other side of the story,” Warden said.

“So all of the schools, now that we’re a part of a district, where before each school was an individual district so they were looking at their curriculum and their student’s performance against certain measures, like SBAC, as a school. And now we’re a district, so we’re looking at finding ways to better align what students are learning across the district and measuring that and evaluating that data and analyzing that data. So we’re looking for what they call Common Local Assessments. One common assessment that all kids take in the district is the SBAC, but that’s at a state level. So we’re looking for ways, at a local level, to see how kids are doing in all the schools and how they’re performing. And then how each individual kid is doing over a longer period of time,” Warden said.

According to a 2016 article called The Real Purpose of Assessments in Education by Matthew Lynch, assessments take place in order to measure student growth, determine student performance, allow teachers to change curriculum, etc. Assessments are important to ensure that education is fitting for the students and that they are learning what is necessary for their grade level.

An article titled Is the Use of Standardized Tests Improving Education in America? focuses on debating the pros and cons of assessments measuring growth.

“93% of studies on student testing, including the use of large-scale and high-stakes standardized tests, found a “positive effect” on student achievement, according to a peer-reviewed, 100-year analysis of testing research completed in 2011 by testing scholar Richard P. Phelps,” the article said.

The article also mentioned that although these tests have positive reviews, they have not improved student achievement.For the new writing prompt taking place in the Maple Run Unified School District, the main idea is to measure student growth over a period of time within certain criteria.

“So it’s looking at a specific set of certain criteria, you know, and specific types of writing. There are three types of writing that students will be tracked over time on those very specific skills. So that you can really hone in on where kids need to improve and what needs to be done to support them. When we get the SBAC scores back, one, it’s sort of after-the-fact, at least in eleventh grade it felt more after-the-fact, especially when we got the scores back, and that writing scores take the longest to come back. So this is kind of more, right now, where are students at, what should they be working on, and how do we track that,” Warden said.

“Assessing writing in the three formats of the Common Core was something the administrative team has been discussing for a while. We want a Maple Run Unified School District Common Local Assessment. We started work on it last year and tested that work last spring. This summer we created prompts for all three writing formats and all grades from K-12. We thought [preschool] was too young to assess. To do this we had teachers from all of our schools work together to design and document the task. We want to see the growth of our students in all of the critical components of learning, and writing is one of those. In fact, writing is critical in how many testing systems test reading,” Cavallo said.

One of the concerns raised about the writing prompt is that advisors will be grading them. Because all students have different advisors, teachers with different learning backgrounds will be grading the assessments. For example, people were questioning how an English teacher will grade the writing prompt results versus a physical education teacher.

Warden explained that who student’s advisors are will not affect their score on the writing prompt.

Warden also mentioned that she believes all teachers incorporate English into their classes.

“It uses the 6+1 traits writing rubric that is an established standard for assessing writing from [Kindergarten] through 12th grade. Having a consistent rubric allows us to look at growth over the time our students are part of Maple Run Unified School District. It is also important that we are able to use rubrics that are different from the ones we teach with. It helps us see that the knowledge is generalized and that students are really able to perform with multiple measures,” Cavallo said.

For those worried about different teachers grading writing prompts differently, Warden explained that every advisor should be on the same page for assessing students.

“So we’ll put up examples, so this is a three for sentence structure because of these things, this one is a two because of these things. So we call that benchmarking, when we put up examples of a one, a two, a three, and a four, so that everybody is assessing to that same standard. Then if there is question, or somebody isn’t sure, then you team up. I would score it, you would score it, and then we would compare and have a discussion about why a three instead of a two or why a two instead of a three, and go back to the student work and try to pull out the evidence that supports a two or a three. So it’s a much larger process to make sure that it is equitable for all students, regardless of who their teacher is. And the fact that they are all using the same exact rubric helps because when you’re scored in English about your writing, it’s one rubric, if you’re writing in P.E., it’s a different rubric. So this one, it’s the same rubric, which helps with reliability, we call that interrater reliability,” Warden said.

The MRUSD Common Local Assessment Rubric focuses on several writing aspects: ideas, organization, word choice, sentence fluency/structure/variety, conventions, and voice. The students may receive a score of one, two, three, or four in each category.

Although students may see this prompt as just another test to take, this one is important to the Maple Run Unified School District Board.

“It is a priority that supports a district-wide goal that’s part of our five year plan to better align curriculum and have Common Local Assessments as well as our continuous improvement plan, which is a state requirement where we are looking at specific standards that students need to be learning and how are they performing against them,” Warden said.