Integration for the BFA commUNITY 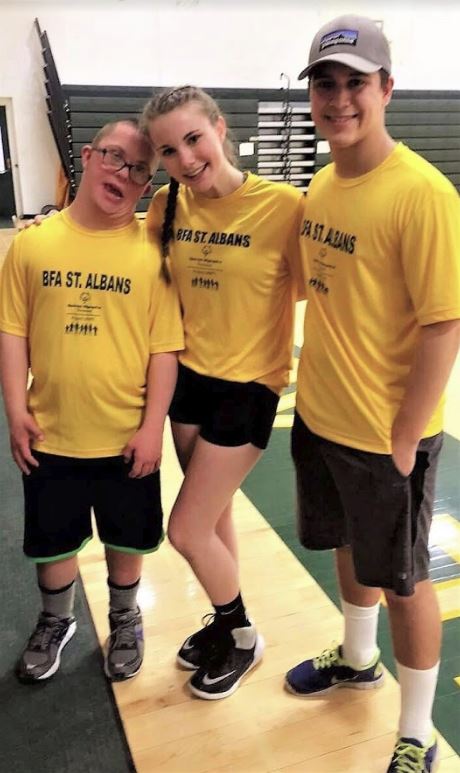 For over twenty years the club Unified Sports enriched BFA to give everybody the possibility to participate and succeed in a sport they desire to practice.

Besides the sport itself, Unified Sports stands for more; it supports integration and, as the name indicates, unity to the BFA community.

Unified Sports is a place for students to connect, play and educate each other. Students as well as adults are taking on three different types of roles: athletes, partners and coaches.

Bill Mercier is not only a specialist for Tech Support in the BFA Informational Technology Department, but he also has personal knowledge about and years of experience with integration of young people living with disabilities. Mercier has been a coach for Unified Sports since he started working at BFA in 2006.

“I help teach the kids the sport and kind of help whether it’s athletes need help with sport or partners that need help. Some of the partners that come are very nervous and shy so you’re kind of like the gel and once it takes over you really just watch and smile,” Mercier said.

Grace Brooks (‘20) has been a partner for Unified Sports since her freshman year. Before she started attending BFA, she had already been involved in a Special Olympics Club at her previous school. Brooks knows a lot about the club, its members and activities and even was awarded Unified Sports partner of the year in 2017 for the whole state of Vermont.

“Starting in the fall we play soccer and then we migrate into floorball, snowshoeing, we do some basketball and then we do bocce. We have separate tournaments for each of them and sometimes you have to pick and choose what we’re going to do,” Brooks said.

“If [athletes] are physically unable to do a task, like if they are in a wheelchair and can’t shoot a typical basket… instead of going hard on the person with the wheelchair it’s more like we’re gonna roll them to the basket and line them up to the ball or even get a shorter basket. That really makes a difference. For example in basketball there is “partners play” and “athletes play”. Partners are not allowed to shoot and the athletes are the only ones that are allowed to score so our process is dribbling down the ball and handing it to the person so they can feel the happiness of making a basket. We just help them in reaching that goal. It’s not about winning, it’s not about losing, it’s about just having fun and being a community,” Brooks said.

She also knows how difficult it can be to get people understand and not be afraid or distant in contact with people with disabilities. According to playunified.org, it was “inspired by a simple principle: training together and playing together is a quick path to friendship and understanding.”

There are still many misunderstandings or simply not enough knowledge about this topic. Unified Sport tries to spread awareness and causes inclusion/ integration instead of separation.

“Some people see them as different and incapable in doing something, that’s not entirely true. Just because they may be in a wheelchair, they may have a walking helper, that they can’t be as intelligent or as capable to shoot a basket or to be in school as other people,” Brooks said.

Mercier confirms the existence of this problem of ignorance.

“Unless you have somebody in your family that has special needs or that you are really friends with, they don’t have the knowledge. Things that are foreign to people, that they don’t know about, they don’t understand. A lot of people are not educated in the knowledge of somebody with special needs, that they are not so different. And once they play sports with them, hang out with them, socialize with them, it’s not foreign to them. So a lot of people, whether they are children, teens or adults, if they’ve never met an athlete or a person with special needs and got to know them, they don’t understand that it’s okay to be different. Everybody is different. You and I are different,” Mercier said.

At the moment the club counts about 20 members and according to Brooks “it has been a bigger thing every year, so more people are getting involved.”

One of the athletes is Ian Carpenter. He is part of the team since three years and he likes it because he “loves his partners and coaches” and because his “fans cheer him on.” His favorite part is basketball.

“Me as an athlete, I can do better, more, more dribbling in basketball,” Carpenter said.

The impact Unified Sports has on the BFA community, goes even further. The sport and the activities themselves cause not only fun during their practices, tournaments and games; Unified Sports promotes inclusion of everybody and a stands for a community that welcomes students no matter who they are.

“It’s basically to help out the athletes and kind of make them feel that they matter because a lot of the time they get picked on for having for being a little bit different than us. They are just people, they are just the same,” Brooks said.

Unified Sports is part of Special Olympics and takes place all over the world. The organization just celebrated their 50th anniversary and is still working on reaching out to even more people to come and join the community or, how Brooks says, it’s “a big family of people who love and support each other.”

Through Unified Sports athletes develop skills in other areas not connected to the sport itself.

“We try to push these individuals into the sport piece so that they can learn more social skills and it’s amazing to see how their behavior develops as these friendships arise and they play sports,” Mercier said.

Another characteristic in which Unified Sports differs from “ordinary” sport teams is the type of attitude and motivation they show. Of course, competitiveness is always going to be a part but shouldn’t sports be about more than wins and losses?

“Especially the bocce term; that’s a great way to see what happens. Over 400 people just having a good time. There is competitiveness but it’s not the same. Say you have a varsity team and they just lost a playoff game, they are pretty upset, as normal. These kids, one of them might be down or something but they just met a new friend from Montpelier or whatever and it builds a lot of friendships,” Mercier said.

The values this community has do also differ from the issues a lot of youth groups are dealing with today.

“The peer pressure is not there, to do this, do that, or you gotta be in this clique or that clique. They are just happy to be with their friends and their are not judgemental, they don’t care what you got on, like “oh look at the way he’s dressed, we can’t talk to him”. You put music on when there is a bunch of athletes around and you got a party. There is nobody sitting on the bleachers, they are all together, there is never any fighting, everybody is just happy to be together,” Mercier said.

Both the athletes as well as partners benefit from these special relationships and experiences.

“Some of them come in just to do their ten hours of senior community service, but before they are done, they are hooked. Some partners have changed their majors, where they want to go to college, to be into special education,” Mercier said.

A perfect example for this case is Brooks, who confirms this phenomenon.

“I’m part of this club to make a difference. It actually inspired me to go on and become a special educator after college so that’s what I’m gonna do and I just love the kids and the adults that are incorporated in this club. It has opened a lot of people’s eyes. People that never thought they would work with a student or a person with special needs, they opened their eyes,” Brooks said.

Unified Sports meets usually every Thursday after school from 3:00 to 4:00 PM. Everybody who’s interested is welcome to participate.

“Don’t be afraid to come and participate or even watch,” Mercier said.

Don’t hesitate to give a try and comply with the official Special Olympics oath:

“Let me win but if I can not win let me be brave in the attempt.”