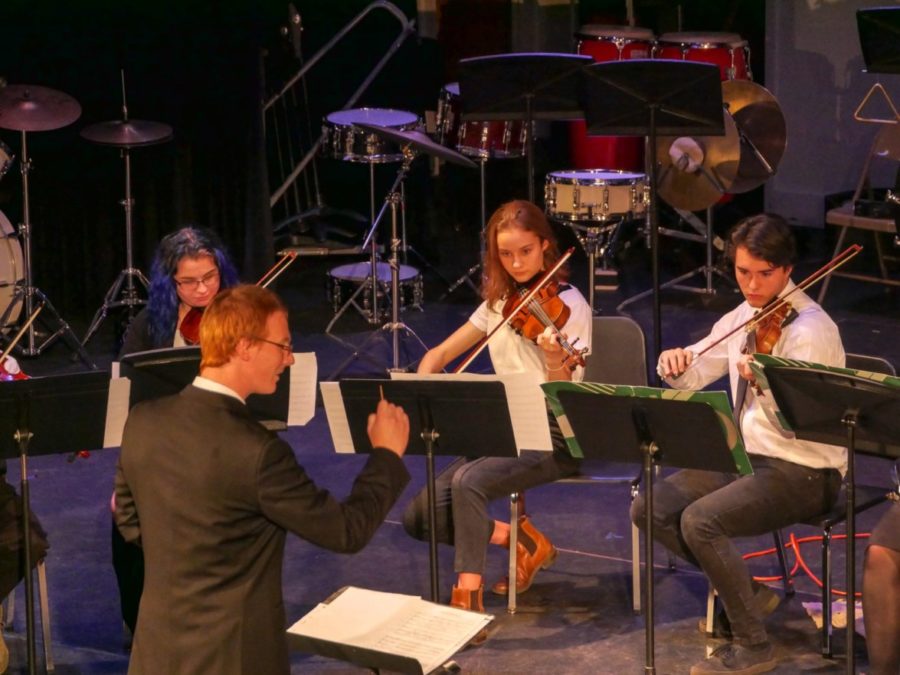 The Maple Run Unified School District has been lucky enough to have a strong music program, with chorus and band and other music classes offered throughout the various schools. Until recently however, there was no strings program available at most of the elementary or middle schools within the district.

The district has recently welcomed a new strings teacher, Alex “Rusty” Charpentier. According to SATEC music teacher Andrew Palumbo, who was also a member on the search committee responsible for hiring Charpentier, there has been a demand for a strings teacher for quite some time.

“While BFA and SACS had string programs there really wasn’t an ‘official’ string teacher in our district. Students at my school have been curious about learning string instruments, so it was a great time to get someone who really specializes in string education,” Palumbo said.

Charpentier has years of experience under his belt, first giving private lessons before moving on to teaching full-time.

“I began teaching private lessons in 2010 and have been teaching orchestra in schools since 2012,” Charpentier said.

Charpentier feels that joining the MRUSD can help him inspire students of all ages.

“I was so excited when I saw this job posted because I thought it would be a great fit for me. I felt really lucky to be offered this position and am very thankful for my old high school music teacher Mary Bauer who helped put in a good word for me when I applied. It’s nice to come to have a job I feel is important and that I really look forward to doing every day,” Charpentier said.

There are certain qualities candidates for the position had to possess, which the search committee used to assess who would be best suited for the job.

“First and foremost, someone who knows how to play string instruments proficiently, and how to teach them to students. Also, someone who has patience, shows kindness, and makes learning fun. I believe Mr. Charpentier has all of those skills,” Palumbo said.

In an article posted on the National Association for Music Education website, the presence of music programs within schools greatly benefit students in a multitude of ways.

Not only can music help improve test scores, but can do wonders for emotional development at an early age.

In a Ted Talk animation by Anita Collins, it describes how specifically playing an instrument affects the brain.

“Playing a musical instrument engages practically every area of the brain at once, especially the visual, auditory, and motor cortices,” Collins said.

Playing music, rather than just listening to it, requires more work from the brain, helping to strengthen different brain functions for other settings as well.

“Disciplined, structured practice in playing music strengthens brain functions, allowing us to apply that strength to other activities,” Collins said.

Charpentier is confident that expanding the MRUSD music program will greatly benefit the students and the community overall.

“I really believe having strings in the Maple Run district will make a positive impact on the students who participate and the community at large. Studies have shown how valuable playing an instrument is for developing unique neural connections between different parts of the brain resulting in higher executive functioning skills. A person with a music education will develop stronger critical thinking skills and strengthen their ability to empathize with others,” Charpentier said.

The opportunity for students of all age groups to participate in orchestra gives them more options to express their creative outlets, and potentially find a love for music and performing arts.

“The best reason to be in orchestra or any musical ensemble is simply because it is fun! I like to teach pieces of music that students want to learn and help students build universal skills to help them express themselves no matter what type of music they love to make,” Charpentier said.

Charpentier hopes to see the string ensembles in each school grow in popularity.

“We have a healthy enrollment but I would love to see many more students join in the years to come. We have 12 students at BFA, 25 students at SATEC, 15 at SACS, and five at Fairfield making our total enrollment in the district 57 students. I think our numbers will grow as more people learn about it and see and experience our orchestras in performance,” Charpentier said.

Palumbo speaks highly of the newcomer, and is confident that he was the perfect choice for the opening.

“I’ve gotten to know Mr. Charpentier this year and I know, without a doubt, that he is the best person for the job here in the MRUSD. Not only is he a gifted musician, but he’s an excellent teacher. He’s kind, patient, creative, and has made connections with students and staff in all of the schools. He is always looking for ways to help others and shows students his love for music and playing string instruments,” Palumbo said.

Whatever your musical interests are, there are even more options available now in the district, thanks to the hiring of Mr. Charpentier. Students are no longer limited to just percussion or winds, and hopefully this will draw in even more future musicians.