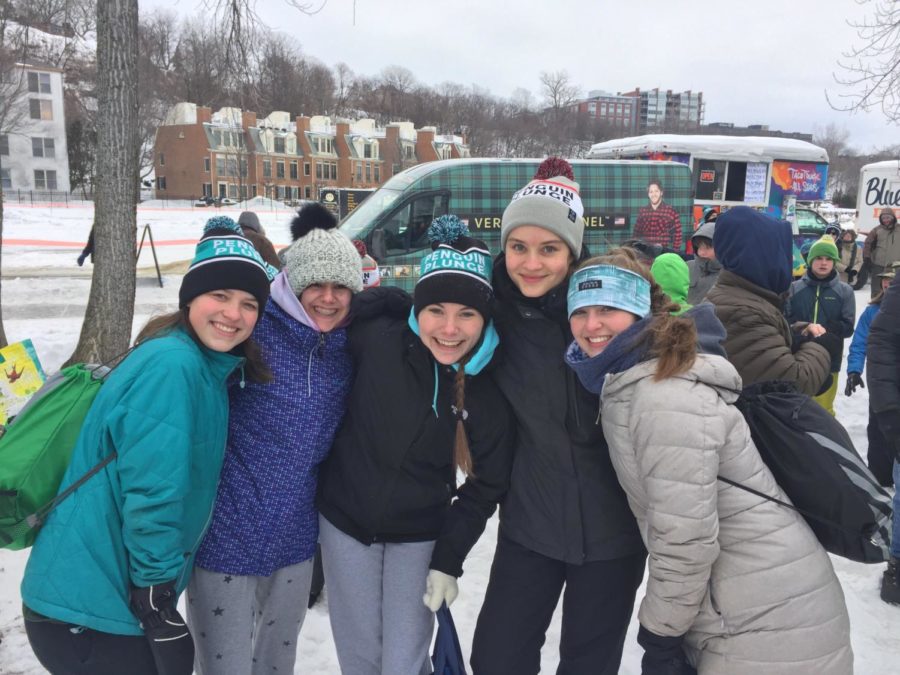 On Saturday, Feb. 2, 2019, many students and community members around Vermont, including 11 members on the BFA team, did the Penguin Plunge in order to raise money for Special Olympics Vermont.

According to the Penguin Plunge website, the purpose of the fundraiser is to raise as much money as possible for Special Olympics.

“Funds raised through this event impact athletes with intellectual disabilities and their families across the state, and provide life changing experiences,” the website says.

Multiple members of the BFA community participated in this plunge, including Student Resource Officer David French and BFA student and team leader for the BFA Penguin Plunge team, Sophie Thompson (’21). Kasia Bilodeau, a special educator at BFA, was the coach for the Penguin Plunge team.

French elaborated on how money is raised from Penguin Plunge.

“So every person that participates has to raise 150 dollars on their own, or more. And most people raise more. I’ve gotten it from complete strangers, I put it on Facebook, and then family members, stuff like that,” French said.

Other fundraising events are held throughout the year in order to raise money for Special Olympics, as well as the individual schools’ Unified Sports teams. When teams participate in these fundraising events, a percentage of the money goes back to them to improve their own teams.

“So I know they do the Torch Run, every year for Special Olympics. That’s another thing that law enforcement helps with. I don’t know if that’s law enforcement run or not but I did it in 2014, 2015, 2016, 2017, and I did not participate last year, but I probably will this year, too. That’s the only other Special Olympics [fundraiser] that I know about,” French said.

The Torch Run, which French described, is specifically sponsored by members of Law Enforcement in Vermont.

The Law Enforcement Torch Run allows members of law enforcement to meet Special Olympics athletes and compete with them in order to raise money for Special Olympics. According to the Law Enforcement Torch Run website, “Annually, more than 85,000 dedicated, compassionate, volunteer law enforcement officers participate in the torch run throughout 46 nations, 12 Canadian provinces and all 50 US states, raising more than $560 million since its inception in 1981.”

French decided to participate in the Penguin Plunge because of his passion for the Special Olympics.

“I’ve done [the Torch Run] before and I didn’t honestly know that Special Olympics did the Penguin Plunge, and when I moved back to Vermont, I was like ‘I’m gonna do a plunge’. So this was perfect, it worked alongside myself already giving towards Special Olympics to just have another event that I can be involved in,” French said.

French encourages people to participate in Special Olympics fundraisers in the future.

“Giving back to the community is always something you want to do as a person. I think good people just want to do that. But I also want to give an outlet so that people can succeed to the best of their abilities,” French said.

Kasia Bilodeau became involved in Special Olympics when she first began teaching at BFA in the Community Integration Program.

“I began helping with BFA Unified [Sports] my 1st year at BFA, 2007. I wanted to connect with my students outside of the classroom and I wanted to meet students that were not supported through the Community Integration Program (CIP). Once I got involved, joining the plunge team made sense. I’ve taken the plunge 5 times but now watch & cheer from the sidelines,” Bilodeau said.

Special Olympics and the individual Unified Sports teams participate in other fundraisers throughout the year, as Bilodeau described.

“At the State level they do a variety of fundraisers including an annual golf tournament. BFA Unified hasn’t done any fundraisers, for a few years. When we were headed to USA Games, in 2014, to had a change contest where the advisory competed against each other to see who could raise the most money. The winning advisory won treats,” Bilodeau said.

Sophie Thompson (’21) has been involved in Special Olympics for the majority of her life.

“My mom’s the coach, so I’ve obviously had influence from her. But, the first time I did [Penguin Plunge] was actually on my eighth birthday, so I thought that would be a cool thing to do,” Thompson said.

Thompson even decided to take on the role of being the team leader in the Penguin Plunge event this year, which is not typically done by a student.

“Basically, the students know that they can either come to me or Officer French, and also I have to do all of the yelling at the event. It’s usually supposed to be an adult, but Jim Naylor was our former one and he’s now teaching at [St. Albans] City School, so I took over,” Thompson said.

Thompson, as a member of the Unified Sports team at BFA, wants as many people to participate as possible in order to give back to the team.

“Part of the money we fundraise comes back to our program, so I think that the Plunge specifically helps our program as well, not just Special Olympics as a whole. And our program is great, but we definitely have things we could improve,” Thompson said.

For the BFA Unified Sports team, the money goes toward the entry fees for each of the five tournaments per year, purchasing uniforms, paying for meals during tournaments, and equipment. For the Penguin Plunge, the BFA team raised about 2,500 dollars, with only 11 people participating. Thompson, French, and Bilodeau encourage everyone to participate in future Special Olympics fundraisers in order to raise even more money for Special Olympics Vermont and the BFA Unified Sports team.