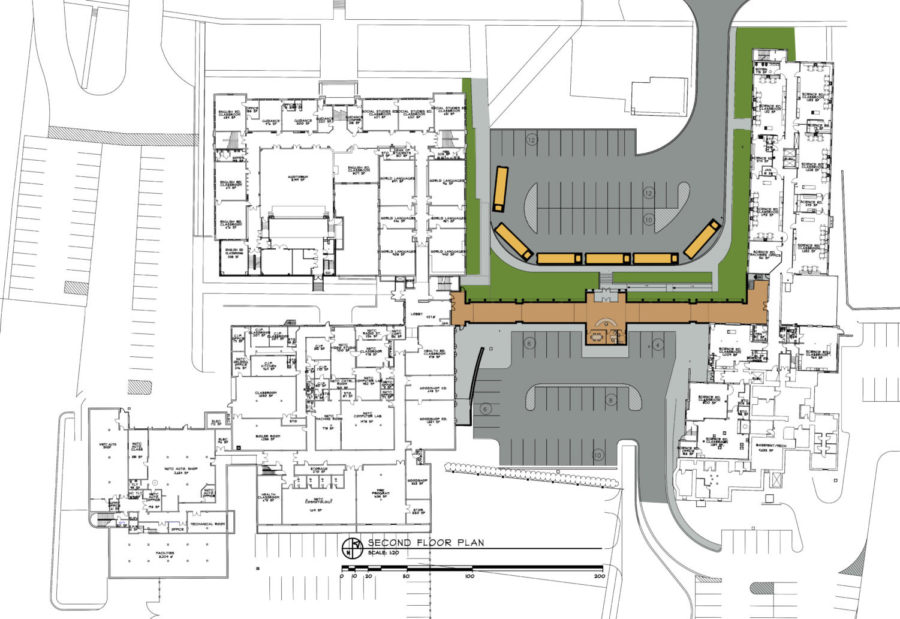 The trek between the North and South buildings has been talked about among BFA students, faculty, and staff for years, and finally, a new connector is in the works.

But the connector is not the only planned new improvement to BFA. According to Laz Scangas of Arnold and Scangas Architects, many additions will be made to BFA over the next few years as part of this “Safety and Security” project.

According to the Safety and Security Pamphlet about the project, The Maple Run Unified School District has approved putting it on the ballot for the approval of voters for 5,722,153 dollars through a bond. This bond will pay for the new renovations over a 25 to 30 year period.

Scangas believes these renovations are important to the safety of students and faculty at BFA.

“I think it makes sense. Well, it offers students and staff protection, both from the environment and in terms of safety. Especially in the middle of winter, I mean, you shouldn’t have to go [outside], and if you don’t have time to get your jacket, or you have to carry your jacket the whole day,” Scangas said.

Dino Patsouris, outreach coordinator for the Northwest Technical Center and the Maple Run Unified School District, agrees that these changes are necessary.

“I think it’s long overdue. I was a student here not too long ago, and it’s almost like that walk across buildings in the wintertime is kind of like an initiation. Everyone slips at least once. So, this is a great way to keep the kids warm and safe for obvious reasons. The connector is just one big part of the whole project, while it is the most visually appealing part, a lot of it is going to go toward repairing the North Building. It’s kind of falling to pieces,” Patsouris said.

Patsouris also said that these renovations are needed for fire safety.

Not only will the new connector provide students with safety from the weather, it also has many other benefits. For example, the maintenance staff at BFA will no longer have to constantly clear the walkway when there is snow or ice. This connector will also reduce the frequency of unauthorized people on campus because of the new security system in the connector.

Patsouris explained the logistics of the connector.

“There will be a double door entrance, a secured vestibule, where you’ll basically have the first set of doors unlocked, and a guest can walk in. And then a second set of doors remains locked until the person is identified by either the [Student Resource Officer] or whoever is working the new reception area or something like that,” Patsouris said.

Inside the connector, there will be a centralized conference room, as well as a reception area and restroom. Patsouris added to the purpose of these rooms in the connector.

“Safety-wise, as well, you’ll notice that there is a central conference room and a restroom there, so there’s really no need for an unauthorized visitor to go into either school building. And there’s certainly potential for automatic doors on each end, so if there was an incident, someone at the reception desk can just close off both buildings and lock the school so that anything that happens in [the connector] doesn’t necessarily have to go into the other buildings. So safety-wise, that’s huge, especially that double door system,” Patsouris said.

Scangas added that they designed the connector to match the overall look of the school.

“Well, we tried to give it some character. It’s just a connector, you know, there’s a conference room in there, and an office space in there, and there’s a reception area. But, we didn’t want to take anything away from the original high school. Our intent is to match the brick work and to match the columns, and match the windows at the school in terms of color and texture. But we want it to have it’s own, sort of, character,” Scangas said.

Scangas explained that all of these renovations will take approximately three years to finish.

“It should be done by 2021. It’s going to take three summers to do the sprinkler work at the South Building, because there’s so much building that we can’t do it in one summer because of all of the work. And you have such a tight deadline by the time the kids get out of school and when they start, there just isn’t enough time,” Scangas said.

Many people have been questioning the 5.7 million dollar projected price of these renovations. Overall, the bond will pay for the new connector, as well as renovations to the 1889 Hospital Building, which include: new decking, brick repair, windows, doors, selective replacement of current roofs, replacement of rotted trim, and reinforcement of the cafeteria floor. This bond will also pay for fixing of broken sidewalks around the buildings, the removal of the three transformers, a new exterior transformer and electric service, and new fire doors in certain areas in each building.

Patsouris also explained the reasoning behind choosing to pay for these renovations in a bond, rather than all at once.

“A bond is essentially like a loan. So instead of taking the necessary funds out of our own accounts, we’ll just pay over time. I think it will be a 25 of 30 year loan. The tax impact isn’t tremendous, so the first year is just interest, and this is only based on, like, a 200,000 dollar house. So the impact per taxpayer is judged by every thousand dollars of your property value. On a 200,000 house, the first year is 15 dollars, because you’re just paying that interest back. You start paying there and then as you pay the principle off, the payments year to year will get smaller and smaller. Whereas if we were going to try to put that into a budget, and have that pass, I think it would be near impossible because that would mean instead of paying 5.7 million dollars over 30 years, we would be paying for it in 2020. It would not be a 15 dollar increase in that case, it would be thousands and thousands of dollars a year for each taxpayer. So that’s the benefit of doing the bond over paying for it outright,” Patsouris said.

Although the Maple Run Unified District Board has approved the bond for these renovations, it still needs to be voted on by the people. Scangas and Patsouris both urge people to vote to approve this bond on Town Meeting Day, on March 5.