Art teachers work to coordinate efforts across all ages 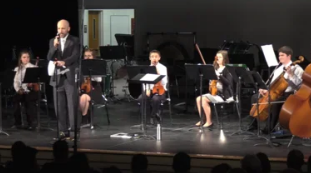 Often, things are happening within BFA, under our very noses, that we don’t realise. When school is out for the student, we often forget that there is still work being done.

But what we don’t see and know is still important to our education. This is clear in the work of the BFA Arts Department.

For the past couple years, the BFA Arts Department teachers – visual arts, music, theatre and dance – has been meeting with the Arts Departments from Saint Albans Town Educational Center, Saint Albans City School, and Fairfield Center School during in-service days.

“[The Arts Department] spoke with me several years ago about the need for a K-12 curriculum that’s consistent throughout the schools so that everybody knew what everybody else was doing and so whether you came from City, Town, or Fairfield when you get to BFA you have the same skills. Certain things were done inconsistently between the schools, especially when we used to be Franklin Central. So these in-services allow them to get all together – there’s about 20 of them in all – to get together and to talk between the schools and come up with a curriculum that’s consistent,” MRUSD Superintendent and facilitator of the meetings, Kevin Dirth said.

These meetings last a full in-service day. The teachers start by getting a chance to speak as a full group about their schools, their classes, and their students. After this, they break off by discipline to talk and plan in smaller groups.

“I think because we’re in different schools, communicating is very important. Like, we don’t get to see the arts teachers other than these meetings so it’s just really nice to talk about what their kids are doing, what their kids needs are. With everybody coming from different sending schools, it’s difficult to know,” Dee Christie, the BFA Visual Arts Department Head said.

With the consolidation of Franklin County Supervisory Union (FCSU) into the new MRUSD, the arts departments were presented an opportunity: they could now collaborate as a District. This was fortunate timing, because they were also presented with the real need to rework the arts curriculums across the Maple Run District to align with proficiency based grading.

The teachers aren’t alone in this work, however.

“We have two people who helped consult with the teachers, one for visual arts and one for music. They’re statewide people who have a good knowledge of arts curriculum, so they’ve been involved in this too. The art person is Emily Titterton and she actually works for the Agency of Education, for the arts, so she has a lot of expertise. And working with the music people is Tony Pietrocola. They’ve just been helping consult and work with the teachers to get it done,” Dirth said.

Christie feels that these meetings have been an important step not only in unifying the District’s arts programs, but in portraying the BFA Arts Department as a legitimate discipline and an important part of student life.

“There’s just so much documentation and so much literature about why art is important for every kind of kid… it’s just been proven that kids need a break in their heads, and it’s a different way of thinking and helps them solve problems more, with different kinds of problem solving. Some kids are so mathematical, but it’s nice to have a break in their day because they can get so bogged down and this is just a release,” Christie said.