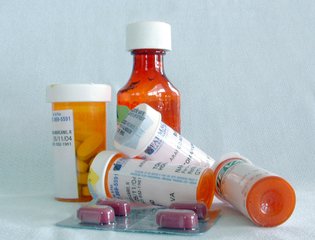 Advil against a headache, Tylenol for a little cold, Ibuprofen when your back is sore… many students like to grab some helpful over-the-counter medications in such situations. But taking those with you to school could cause serious trouble. Some are complaining about those “unnecessary,” though for teens often important rules.

Valerie Lipka is one of BFA’s nurses and one of her responsibilities is handling and administering medication for students. As Lipka is part of the health office, she has to follow rules and policies mandated by the Vermont Department of Education, and the school itself.

“Legally [students] have to come to me and I hold the medication at all times and they are not even supposed to transport it to school, usually they have to have a parent transport it. [For] prescription medications it’s a little more important, over the counter medications, Tylenol and Advil and things like that, we always have in our offices for stock and any student can access that with a health form or phone call,” Lipka said.

The BFA Parent and Student Handbook 2019 specifically states that “any medications, even over-the-counter medicines, should not be in the personal possession of a student or stored in a student’s locker.” Exceptions are inhalers or EpiPens which some students might immediately need in some emergency situations.
Especially important are the rules about prescription drugs. In case a doctor prescribes those to a student, precautions have to be made so that those don’t end up in the wrong hands. As written in the Parent and Student Handbook, the school needs a signed form from a parent/ legal guardian as well as from the responsible doctor, and just like over-the-counter medications, the health office needs to hold it at all times.

The fear of medicine in students’ hands isn’t unfounded though. According to the Vermont Youth Risk Behavior Survey from 2017, almost one in ten high school students claims to have already misused prescription pain medicine. Lipka additionally mentions that even popular over the counter medication can be abused although people might not expect them to be in some way dangerous too. 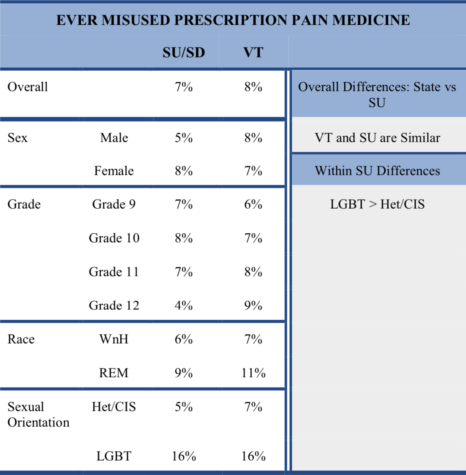 “Many different medications can be abused. It can be something that they would have gotten at home or off the street, pain medications that are not prescribed to them or it can be even ADHD medications. It happens and we’re obviously concerned because you never should take somebody else’s medication and then it’s highly addictive so then they want more and that’s concerning,” Lipka said.

An example for an abuse of a putative “safe” medication that recently occured is the so-called “purple drink.” Since cough syrup can be purchased at almost any place without prescription, people started abusing it without knowing that it can cause serious harm to the body if not taken properly.
And once you start, it can easily become an addiction, just like with any other well-known drugs which can lead to a not-so-bright future. For example, did you know that 80% of Vermont’s current inmates were charged with crimes that related to drugs? Is that really worth it?

Also, if you do get caught with some type of medication that you are not supposed to have with you, you are about to face a disciplinary procedure that really wouldn’t improve your situation. David French, the School Resource Officer (SRO) tells us what happens when he gets “referral” .

“I cannot do random searches, I can only complete a search if a student gives consent or I have a search warrant. The school policy states if they have reasonable suspicion they can conduct a search. Administration normally has me apart of the search to simply watch for safety reasons,” French said.
In case a student gets caught carrying improper medications on school campus, “they are confiscated and they are referred to the policy. If they are abusing the medication on campus there may be criminal charges pressed.”

French additionally names another reason for not letting students administer their own medication.

“It can be difficult to differentiate between what certain pills might be. It would be very easy for a student to disguise pills that are not Advil in an Advil container. Also, if another student was to obtain said “Advil” container and consume the wrong type of medication that could result in serious injuries,” French said.
Just like Lipka, French sees the danger that lurks in taking strong medication and explains one common possible way people get “hooked”.

“The trend with medications or abusing medications normally stems from a person being prescribed and getting addicted to the medication. When their prescription from a doctor runs out they search to purchase prescriptions or something that will help with the pain from the wrong places,” French said.

Unfortunately, once someone is hooked, it can be hard to break out of this world without support from outside. If you see a friend, sibling or whoever struggling with a misuse of inappropriate medication or drugs, keep in mind that offering help instead of looking away is important and the only right thing to do.

Also French wants students to know that “if someone has issues with prescription drugs [he is] available to talk and give them proper resources.”

As young people, it is our nature to question things. This makes it even more important to reach out to professional people that are willing to listen and to keep your information confidential, whether you want to get a better understanding or you think you or somebody has an issue and needs help.
Additionally and depending on demand, Dr. Jennifer Covino who is a pediatrician with Northwestern Pediatrics, comes in to see students who have questions or are in need of wellness checks for mental health services and substance abuse.