Mercury through the years 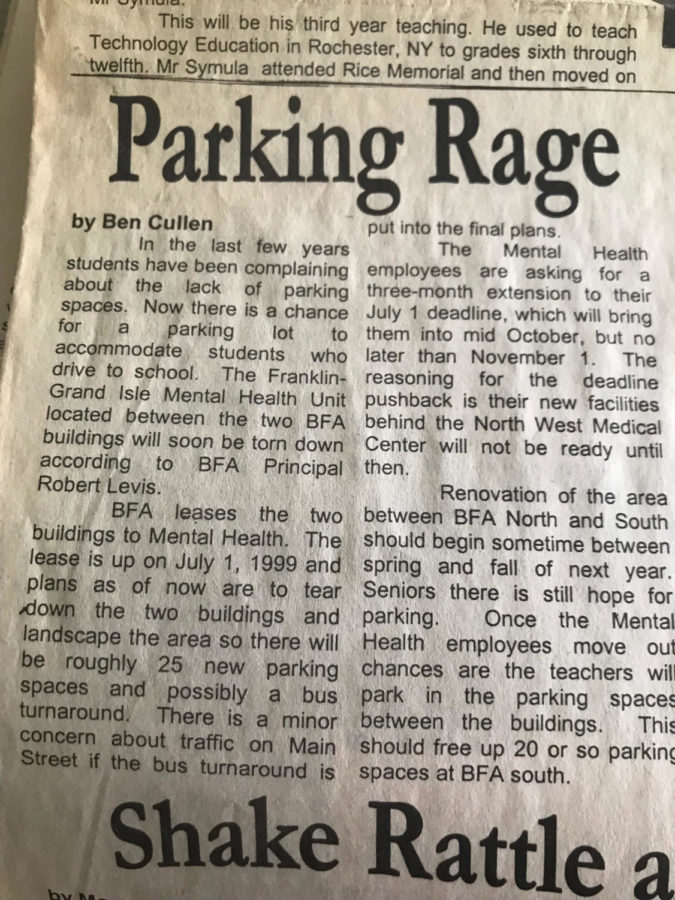 The BFA Mercury has been published regularly at BFA since 1930, when the school first opened. This student publication has covered many topics over the years from school safety to start times. So how many times has history repeated itself?

20 years ago, in 1999, students were talking about many of the same issues as we are today.

“Parking Rage” was written by BFA student Ben Cullen in 1999. He discussed the issue of parking at BFA, which is still heavily talked about in 2019.

“In the last few years students have been complaining about the lack of parking spaces. Now there is a chance for a parking lot to accommodate students who drive to school,” Cullen wrote.

As anyone who has been to BFA knows, there is no student parking, even after this suggestion in 1999. This is still a huge issue for BFA students today, and one can often find students complaining about how far away they had to park. So, will this issue ever be resolved? Or will another article come out 20 years from now discussing the same topic?

In this article, Clark addresses the idea that “The Puddle”, a place where many students parked for school, was being renovated. “The Puddle” was closed, causing 15 to 20 unofficial parking spots to be lost.

In her article, Labelle found that “sixty-three empty spots is what students see, on average, when they walk in between buildings.”

In 1999, when Cullen wrote his article, those 63 empty parking spots were supposedly intended for students.

Another issue that has repeated over the course of BFA history is how grades can affect someone’s sports career. For example, the current procedure at BFA is that if someone’s grades fall below a C, they are unable to play in the sport they participate in until they increase their grade.

The new Health and Wellness Policy being implemented by the MRUSD may affect the Athletic Director’s ability to do this.

Regardless of this current policy, this idea was also discussed in 1985.

An article by Lee Roberts, titled “Grades and sports”, talks about how many courses a student must take at BFA in order to play a sport. According to Roberts, freshmen and sophomores must be enrolled in six courses, juniors in five, and seniors in four. The athletes must also maintain a passing grade in at least three courses.

Roberts compares BFA’s 1985 procedure to that of Rice Memorial High School, where all students must be enrolled in at least six courses.

“Bellows Free Academy seems to have no real problem with students who are athletes, so I see no reason why BFA couldn’t raise their standards a bit to ensure that these students are getting a good education,” Roberts writes.

Roberts also believes that having a “C” average in every class would not be asking too much of students.

In 2019, a student athlete needs to receive signatures from each of their teachers, as well as a proficiency grade. If the student has a grade three (proficient) or four (expanding) for each transferable skill.

Multiple of these stories were published under the previous Mercury adviser for 24 years, Gene Sink, who was also an English teacher at BFA for 38 years.

In an email interview, Sink explored the importance of journalism in the current day.

“The technology has changed vastly but the principles of journalism have not. Anyone who questions the validity or importance of teaching journalism to young people may want to consider that the current President of the United States of America has declared the free press in our country ‘the enemy of the people’ and that there is such a thing as ‘alternative facts’. If this does not scare us then we are not paying attention. The role of the free press in our country predates the revolution that has been instrumental in serving as the watchdog of our elected and appointed officials throughout our history as a nation. There is a reason that freedom of expression is the First Amendment. From Watergate to Zippergate journalists have worked to inform the public on issues critical to our country,” Sink said.

The BFA Mercury is no different than these professional journalists. The Mercury has been questioning the actions of people in Vermont, Franklin County, and BFA.

Michelle Chappel, BFA student in 1999 questioned the actions of Vermonters and their influence on Lake Champlain.

This article, titled “Don’t drink the water” discusses signs of blue green algae in Lake Champlain, which is a current issue of great importance.

During the time of this article, people around St. Albans were advised to buy water bottles instead of using water from Lake Champlain. This was advised after two dogs from New York and one dog from Vermont passed away after drinking the water.

Students in 1999 were highly concerned about the safety and health of Lake Champlain. In 2019, blue green algae is a substantial issue in Vermont, especially in the Northwestern region.

Before the Mercury was a newspaper, it was a yearbook released a few times each year. There are even connections between BFA students in 1931 and now.

In 1931, the Mercury released a story called “School opens again at 8:20”. Students have been debating what time BFA should open since the very first schedule.

“The schedule adopted during the winter months, with school opening at nine o’clock, was discontinued Monday, April twentieth, and the old plan, that of starting at eight twenty, and closing at ten minutes to three, was resumed,” the story said.

When the Mercury eventually became a student-run newspaper, rather than a yearbook, there was lots of room for development.

“[Previous adviser] Joe [Chaput] was responsible for arranging to publish the Mercury once a month in the St Albans Messenger which moved the paper into public view and scrutiny.  The Mercury was a four page broadsheet that could be pulled from the Messenger for our use in school but also went out to the public in the 5,000 copy run for that day. These are the old copies you have probably seen at some time.  This was vastly different from the beginnings of the Mercury which served as the yearbook, published a few times each year. When we did this it was the early days of word processing and offset printing which required manual paste up of the pages and wet development of all photography in a dark room.  It was only the last five years of my tenure that we moved to digital layout with Adobe software,” Sink said.

The point of the BFA Mercury and all student journalism is for students to have their own voice in their education and in society. For 89 years, the Mercury has reported, questioned, and debated ideas within the community, United States, and the world.

Sink also mentioned how important it is for all students to have a voice. In previous years, the Mercury has included a “Letter to the Editor” segment to their prints.

“The [Opinions and Editorial] page is where I got in trouble a few times. Letters to the editor as I said are hard to vet and editorials critical to the administration or school are never well received by those being targeted. That doesn’t mean you shy away from issues that affect the student body. You are their voice and if you forget that you are letting them down,” Sink said.

The Mercury staff suggests that the editors in 2108, 89 years from now, report on how history has again repeated itself!