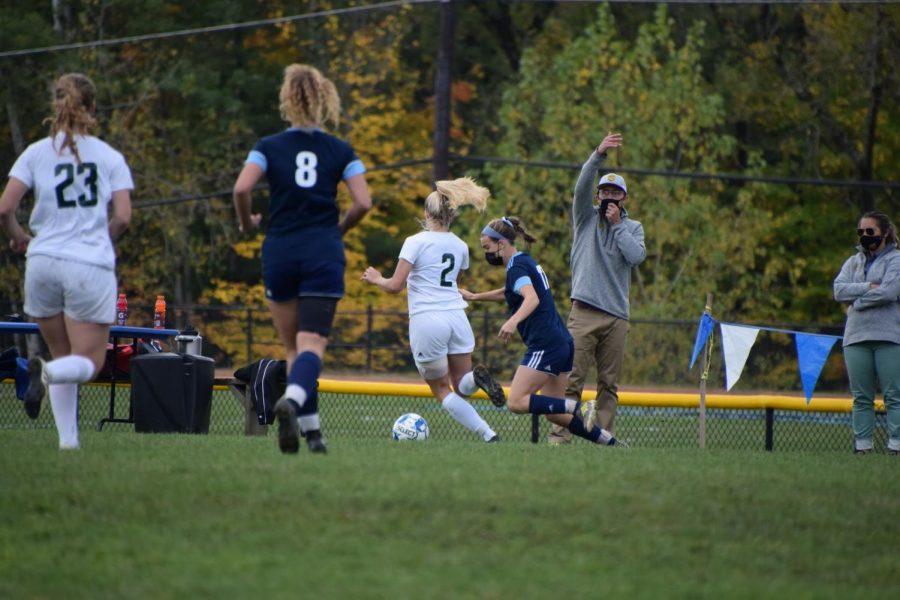 Players in masks sprint down the field in chase of a loose ball, while coaches instruct and shout after them, each wearing a mask as well.

Wearing a mask is just one of the many guidelines BFA athletes and coaches must follow this fall sports season. To stay in line with Vermont Principals’ Association guidelines and CDC recommendations, coaches have had to adjust practices, drills, and games, with each update to the rules. However, have the coaches’ style and intensity changed along with the rules, or are they still the same?

According to Varsity Bobwhite Soccer Coach, Luke Laroche, he has not changed much. His coaching style has remained the same because, for the most part, the season has as well. He stated, “You really only changed something if you needed to, and I don’t think anything needs to be changed if we’re just adding a mask.”

While the rigor of Coach Laroche’s practices and his drive to win games has not changed, his mindset has. Without the opportunity for preparation from summer club teams, this fall season has had less buildup. For this reason, he has geared this season to focus on learning and improvement.

Varsity Comet Soccer Coach, Ben Marlow, echoes Coach Laroche’s point of teams enjoying finally getting the opportunity to play together after several months of social distancing. When speaking on locker rooms being unavailable, he said, “I feel… if nothing else… it’s really made it more apparent just how important it is to be around each other and to really not take for granted… these times and these moments.”

Both coaches talked about how being around each other has brought teams closer than ever before. Whether it be the correct combination of players, the fact that they’ve been separated and unable to play for months, or both, the connection shows through in practices and games.

With a season filled with constant uncertainties, it is crucial for coaches and players alike to have a flexible mindset. “There’s been a lot of rules and changes, and everyone’s just kind of adapted to it. And really adapted at a high level,” said Marlow.

Mindset is a common theme among both coaches and their teams and has carried through most aspects of the fall season. Overall, it is the biggest part of the athletic experience that the coronavirus pandemic has impacted. BFA coaches are holding athletes to the same standards as previous years, but they are coming with a slightly-altered mentality.