How Communication, Trust and Effort are the Most Important Parts of a Relationship. 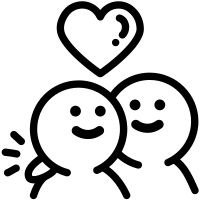 It seems like, in this day in age, teens and adults have almost forgotten about what it takes to build and maintain a sturdy romantic relationship with someone.  No doubt about it, relationships can make even the saddest of people one of the happiest: however, not all relationships go the distance. Everyone is their own person, so there are no real guidelines you can follow to ensure success romantically. Over the past few years, I’ve gathered a lot of experience and lessons that have helped me get to where I am now. I’ve narrowed it down to three main important concepts that help relationships: trust, communication, and effort.

How can you find peace with someone when you’re constantly wondering and worrying about them and what they’re doing? That’s why trust and communication are extremely important. If your partner or, person of interest, is hanging out with a group of friends without you and doesn’t communicate that with you, your thoughts might get the best of you and you’ll be able to justify all these scenarios of them not being loyal behind your back. When someone communicates with you very much, you start to feel more connected and comfortable with them, which helps gain trust. “When it comes to a relationship, everything revolves around trust. If you can’t trust your significant other, why are you dating them? If you constantly have to question their motives and whether or not they’re doing something to contradict your relationship, why are you dating them?” said Victoria Nguyen in her article “The Three Pillars Of A Relationship: Trust, Communication, & Intimacy.” To maintain a good level of communication and trust early on is to make your priorities known. Do you want something that will last? Or do you want a fun time that’ll last a few months maybe? If you both want to build a relationship that’ll last for years, you’re both going to find yourselves in disagreements. The most important thing when fixing those issues is to listen openly to one another while being calm and not interrupting. Apologize when you’re wrong, and try to put yourself in their shoes. If something isn’t a big deal, you might find it better to not bring it up.

Sometimes people rely on talking about every single little issue they might have. For example, if they made a joke to you – which you didn’t like; however, you know it wasn’t a big deal, it might be best to leave it alone and move on. When you’re constantly bringing little problems up, you could make your partner feel like there’s something wrong with them, and they could start to drift away from you. The greatest advice after an argument is to forgive and forget. Bringing up the past constantly won’t do you any good, that’s where people start to abuse constant communication. When it’s over, it’s over. If you don’t trust your partner or your friend, there’s no possible way you can feel truly comfortable and happy with them. Talking out necessary issues will help both of you sleep a lot better. It’s best to communicate with one another, rather than sweeping those big problems under the carpet. Solving issues between each other will provide a sense of relief and, once again, build that trust.

One could argue you don’t need much trust or communication within hookup culture. “As a former student shares the story of her first first date, I’m struck by how the whole concept of dating is brand new to this girl and her friends, though sexual experiences are not. On college campuses across the country, ‘hooking up’ has all but replaced traditional old-school dating rituals…” said Alexandra Solomon in her article “What Hookup Culture Means for the Future of Millennial Love.” Hookup culture is dominating right now because of its easily-accomplishable goal – Intimate fulfillment between two people without the hard work of building much of an emotional bond.

Many people get impatient with building a strong emotional bond with another person and end up taking another opportunity – which is how hookups are often started. Hookup culture encourages things like one-night stands and other physically-related activities, without very much emotional intimacy, bonding, or being a committed relationship between both parties. Lots of movies and shows feature hookup culture between select characters. Take The Office for example. The main character, Michael Scott, is seen giving up on a real emotional connection with women he meets and goes for a one-night stand a number of times. Michael finds himself to be wasting his time because he wants real love that will last. Once he meets Holly, a human resources lady, his attitude changes towards how he goes about relationships. Hookup culture doesn’t work out for Michael in the end, but when taking it slow with Holly, they built an everlasting relationship. While hookup culture may provide brief moments of validation and physical fulfillment, it’s not a committed relationship between two people. There’s no trust and little communication since it’s not exactly necessary when all you have in mind is hooking up.

An effort on both sides is another major importance of sustaining a relationship. Effort is defined by Dorothy Anna Field in her article “This Is What Putting Effort Into A Relationship Really Means, Because It’s Not Just Candlelit Dinners:” “It’s paying attention to all of them when you’re with them, and not putting half your attention on your phone. It’s actually being genuinely curious as to how they’ve been doing and wanting to know their deepest and saddest thoughts at night, and what made them feel this way. It’s surprising them on their birthday and going to their place and making their day special because you know how much they look forward to their birthday. It’s actually making them feel wanted and treating them the way they deserve,” said Field.

Relationships are a lot of work; after all, it’s a commitment. The amount of effort that is put in by both parties will decide the outcome of it all. Effort is something that you should want to put in when you feel very highly of the other person. The goal here is to make each other feel special and wanted.

The most important parts in a relationship are trust, communication, and effort.

Relationship advice from a teenager in this day in age might be the last place you look; however, I’ve had a lot of success after what I’ve experienced with past encounters. We are the product of our mistakes, and you can either learn from them or push them aside.  I’ve learned that if you want something to really last with someone, it’s best to become friends first. I know that may seem extremely obvious, but 1-3 months of being “friends” doesn’t mean you know them all that well. A rule I’ve created for myself is to become close friends with someone for at least 4-6 months before making any real commitment between both of you. Knowing one another for a longer period of time helps establish that vital trust and communication and, if it seems right, you’ll both be putting in the effort to make it happen.