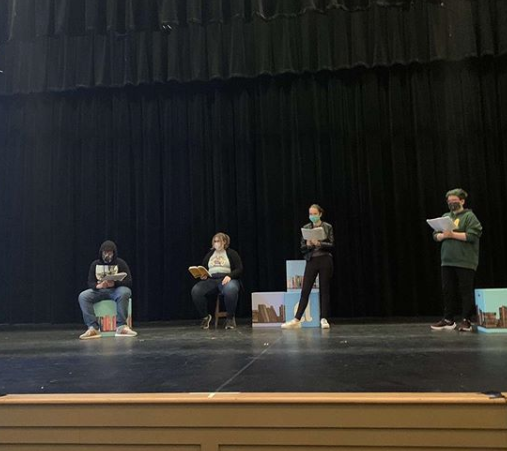 As everyone knows by now, Covid-19 has changed 2020. No one can do anything without being afraid of catching a deadly respiratory illness. It has also transformed the arts departments in schools. At BFA, the theater department has had to make many changes to be able to still have theater this year.

The changes issued by  The Vermont Agency of Education and the Vermont Department of Health states that, “Theater (non-musical) may occur with facial coverings and physical distancing. Any performer contact should be brief and low intensity. ”  The state’s mandates call for breaking the decades-long tradition of an annual fall school musical while also restricting what shows can and cannot be done with limited contact. These guidelines also make different aspects of theater difficult. Masks make it so that the audience can’t see all of the actors’ faces, and they also muffle the voice and restrict the use of a microphone.

Because of these guidelines, BFA wasn’t going to let any clubs (besides sports teams) start until October. If it was not for the Theater Council’s president, Sophie Thompson, who took the initiative and advocated that clubs should be able to start when school did if we were able to follow the guidelines correctly, theater wouldn’t have been able to start until October. This would have been two months later than it would have usually started.

Here is a quote from Thompson’s email to BFA Principal, Brett Blanchard: “I know it may seem like students can wait a month, but many clubs have shows or competitions, just like sports do…  Imagine taking away a month of sports teams practices and still expecting them to do well in the playoffs. That will be the result for many clubs because they aren’t allowed to meet until October.” Blanchard agreed with Thompson’s points and met with her privately to discuss ways for theater to start their year. They came to the conclusion that theater would meet in Taylor Park until the Performing Arts Center (PAC) was available to them.

At the moment, BFA’s theater department is in the midst of rehearsing a one-act play called The Brothers Grimm Spectactulathon, by Don Zolodis, which will be performed on November 19 at 4 p.m. Details about attendance are not yet set in stone, so please stay posted!  The day after the live performance, Nov. 20 at 7 p.m., the theater department will be posting a recorded version for everyone to enjoy.

With the continuing changing and editing of the guidelines, nothing is ever set in stone. Susan Palmer, the theater director, is trying to keep hopes up as the year continues.

“I think my main hope is to maintain the enthusiasm and love and the community for the students who really feel fed by the theater program. I want to maintain those connections, and I continue to grow the program… and finally I would really love there to be some form of Junior Jam, since it’s such a tradition in the school and it’s been at the school for so many years.”

Keep updated with theater at BFA by following their Instagram: @bfatheater