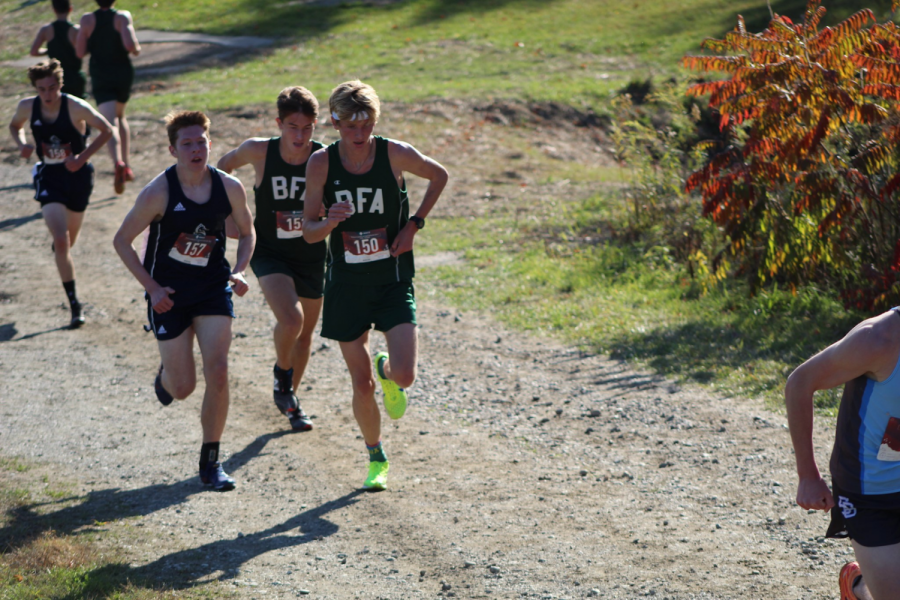 Ethan Mashtare (‘22 right) and Calvin Storms (‘22 center) racing at Champlain Valley Union High School earlier this season. Both runners finished in the top 10 of the division-one boys’ race, the first time BFA has done so (in at least 40 years), according to coach Michael Mashtare. Photo Credit: Michael Mashtare

The boys’ and girls’ BFA cross-country teams traveled to Thetford, Vt. on Saturday, Oct. 31 to compete in the 2020 Vermont State Championships. While the event may have looked different due to the circumstances surrounding the COVID-19 pandemic (such as a lack of spectators or a JV “challenge” race), BFA’s varsity teams brought home the best placements either team has seen in years.

The girls’ team was led by Loghan Hughes (‘22), who placed 10th in the division-one race with a time of 20:43. Hughes is a first-year runner for BFA and is hoping to break the BFA girls’ record for the fastest 5k time next year.

BFA placed fifth in the division-one race, only six points off of fourth-place Essex. Overall, BFA placed seventh, qualifying them for a spot at the Vermont Meet of Championships, taking place Saturday, Nov. 7 at Hard’ack in St. Albans.

Next was Porter Hurteau (‘24), who placed 25th with a time of 18:47. Porter had the fastest time of any freshman in the state on Saturday. Jacob Tremblay (‘22) struggled in the second half of his race on Saturday and placed 31st with a time of 18:56. Tremblay said he hopes to bounce back for Saturday’s Meet of Champions.

BFA boys placed fourth in the division-one race, only seven points off of third-place Essex. Overall, BFA placed fifth, also qualifying them for the Vermont Meet of Champions this Saturday. In a typical year, this would also qualify BFA’s boys team for a spot at the New England Championships, which were also intended to be hosted by Thetford this year.