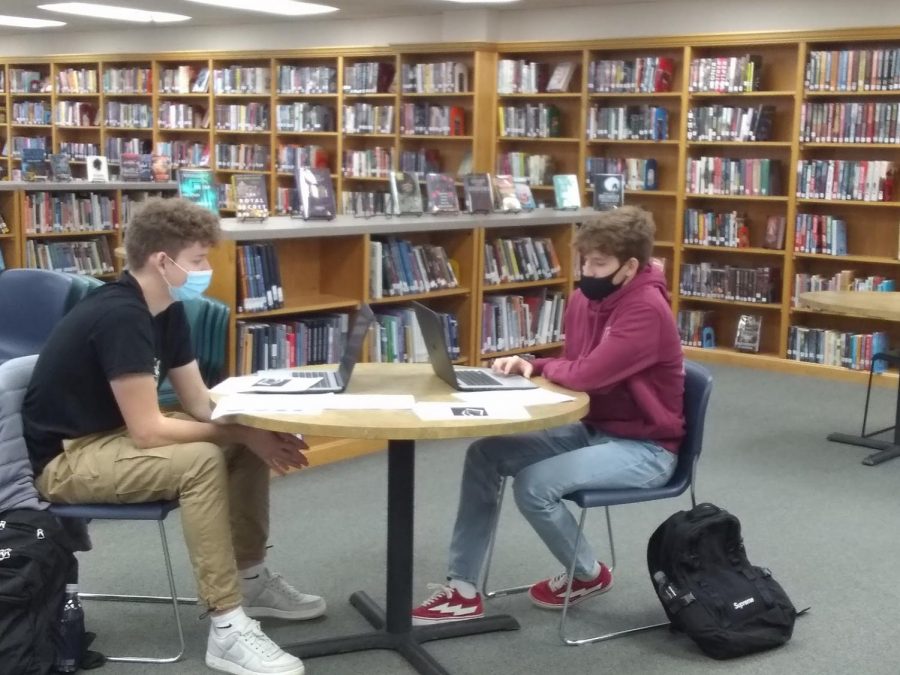 Everyone has been impacted by the pandemic to a certain degree, but for high school seniors, the pandemic has an added stress: how and where to apply for college. Students have certainly been hit hard with modified and/or canceled extracurricular activities, the grueling routine of virtual learning, and now trying to figure out what their next steps after high school look like when the future is uncertain. One may look back and remember the amount of stress that came with college applications, prepping for the SATs, writing multiple essays and filling out tedious financial information, but not with a pandemic in tow.

This year has presented its own challenges as students are unsure of the experience they are getting into. While students would normally be prepping for the SAT, touring schools and writing scholarship essays, now they are trying to meet application deadlines and requirements all while trying to imagine the possibility of living and studying alone for the first time when they get to college during a pandemic.

Stephanie Hodgeman is a high school guidance counselor at Bellows Free Academy, St. Albans, who works with a variety of students around finding the right college. According to Hodgeman, college is where you’re supposed to meet your best friends, attend sporting events, freshman seminars and enjoy the experience of living with a roommate. She said, because there are no tours, kids can’t assess which school will be a social fit for them, which has taken its toll as students have avoided certain schools far from home.

Isabella Bonasera (‘21), like many BFA seniors, is currently under a lot of pressure while trying to imagine herself on a college campus from a remote perspective.

“It wouldn’t just be, oh, are you from Georgia or Fairfield? It would be more like Oregon and Texas,” Bonasera said.

Bonasera, who considers herself a social person, has looked forward to the excitement of living and learning with people she hasn’t known all of her life. She finds the idea of being shut away in a dorm, miles away from her familiar acquaintances, is unappealing and terrifying.

For students who thrive socially, like Bonasera, the idea of going to a new place and not being able to meet people face-to-face is unappealing, especially when the kids you’ve always been with are gone.

Some students, like Sophie Thompson (‘21), who is applying in urban settings, also feel they need to see schools in order to make a final decision. Many applicants feel that you can get a lot more information on a college tour than you can from a website.

“I found out about programs through one college tour that I didn’t even know about, which makes the school more appealing,” Thompson said. “I can’t do this for other schools, which is kind of a disadvantage to applying.”

To narrow down her search, Thompson is looking into how schools have reacted to the pandemic, especially as an unexpected event. Thompson, like many students, has been researching safety protocols such as staggered schedules in dining and residence halls.

Since most, if not all, visiting opportunities are virtual, the BFA Guidance department has been offering virtual conversations with colleges during advisory and enrichment every Wednesday. However, Hodgeman and other counselors have noticed that students, in general, aren’t attending the virtual sessions.

Hodgeman recently spoke with a representative from Vermont Technical College, who has noticed a decrease in attendance for virtual open houses. Hodgeman has also seen a reduction in the number of students who attended the national college fair virtually this year. Even with early and regular decision application events, Hodgeman is unsure that students are getting the crucial information they need to prepare and make the right decision.

“Kids are stabbing in the dark, so to speak, around where they should be applying,” Hodgeman said.

In the past, kids usually had a good idea of where they wanted to apply with at least five to six tours completed the summer going into senior year, but with in-person visits prohibited until further notice, kids are in distress about what the college experience will look like.

Hodgeman has also seen an increase in the number of students applying to New England schools. Instead of applying to schools out west and down south, kids are looking particularly at safety schools and where they will get the best in-person experience.

“I think it’s more opaque than ever because the things we once knew about college may not be true anymore,” Stephanie Hodgeman

In terms of application requirements, students have been both relieved and stressed.

For the next couple of years, a good portion of higher education will be test-optional in order to highlight the importance of other areas in an application. Instead, schools are placing more emphasis on GPA, course rigor, extracurricular activities and the college essay. Hodgeman said most schools are requiring accepted students to take placement exams as prerequisites for specific courses such as calculus.

For many students, the test-optional policy has saved them hours of cramming and constant anxiety.

“I feel like a test score doesn’t define who you are. In my case, with the amount of extracurricular activities I do, and the effort I put into my school work, a test score isn’t going to benefit me,” Bonasera (‘21) said. “Honestly, I think schools should always be test-optional.”

According to Marcia Hunt, the director of college counseling at Pine Crest School in Fort Lauderdale, students who have opted out of taking the SAT are “praying” for more schools to go test-optional, but there are some students who still worry that standardized testing won’t help their application. Hunt is reassuring students that the “turnover” hasn’t changed. Admissions counselors are trying to give applicants different options to help them stand out. For example, the Common Application added an optional, unlimited essay prompt for students with a need to express the virus’s impact on their education.

Hodgeman said with or without the testing requirements, acceptance rates have remained the same as the population of teenagers in New England continues to decline.

For some students, the changes in application requirements extend beyond essays and SAT scores.

As a prospective music student, Thompson has also struggled to comply with the audition precautions this year. While music students would normally start rehearsing and preparing audition recordings early in the fall, this year looks a little different as students are required to wear masks in their recordings. For Thompson, who was only able to start practicing with the rehearsal track a couple of weeks ago, this is an added stress on top of the regular application.

“My first audition is due on January 1st, and I have to memorize three songs, which is really stressful,” Thompson said.

In addition to preparing admissions requirements comes the tedious task of completing taxes and applications for federal student aid. Along with student life and academics, the ideal institution has to be a good financial fit, too.

With higher education being a substantial investment, the thought of being in lifelong debt after pursuing an education is daunting for both first and multi-generation students.

According to an article in the New York Times, the pool of early-decision candidates this fall has decreased by 10 percent, and the applications for federal student aid have reduced by 16 percent, which is likely from low-income families and first-generation students.

While high school seniors usually dread filling out the FAFSA, Hodgeman doesn’t see financial aid placing a barrier on students this year. With reduced enrollment rates, colleges and universities are desperately trying to help families who are facing unemployment changes. Colleges are more than willing to be flexible with families throughout the ever-changing application process.

With dorm rooms being reduced from three or four kids to single occupancy, schools are really struggling financially. Aside from tuition, they rely on fees for amenities, food, housing and athletic events. Colleges have also had to invest a lot of money into testing and safety protocols in order to keep students on campus. Right now, institutions are especially concerned with how the decreased enrollment rates will worsen ongoing financial trouble.

Admissions counselors are also hearing from prospective students who have considered waiting another year to apply, but what will they do in the meantime?

Even with the current circumstances, Hodgeman, who was also on the Board of Advisory for UVM, hasn’t noticed an increase in the number of students who want to defer for a year. During a gap year, students typically take classes through the Community College of Vermont, or other online programs, get a part-time job, volunteer or participate in an athletic program. However, those options are scarce this year due to social distancing requirements.

“The last thing a student wants to do is nothing,” Hodgeman said.

Unsure of when student life will return back to normal, Hodgeman says the main focus is to help students choose the right fit and help them figure out what is important to them in finding the right school. Right now, she’s encouraging students to think about the college experience in terms of semesters. Some schools, like St. Michael’s College, follow a four-by-four schedule while other schools, like the University of Vermont, require students to take five or six classes per semester. Can you see yourself handling a particular course load in a virtual setting? Think about what you can manage in terms of volume and depth. If you’re going into a four-year plan, focus on the courses you would be taking in those eight semesters, something that students often avoided doing in the past.

Along with pacing and schedules, Hodgeman is also advising students to look at specific data points: the four-year graduation rate, which indicates how good the school is at giving kids the sequence they need, and the ratings for professors and other school supports. Also, examine freshman retention rates, which indicate how many freshmen enjoyed their experience and plan to return next year.

“Make a decision not around pieces like Friday night football, but really dig into the curriculum and envision yourself completing the coursework for eight semesters,” Hodgeman said.