What it Means to be a Bobwhite or Comet 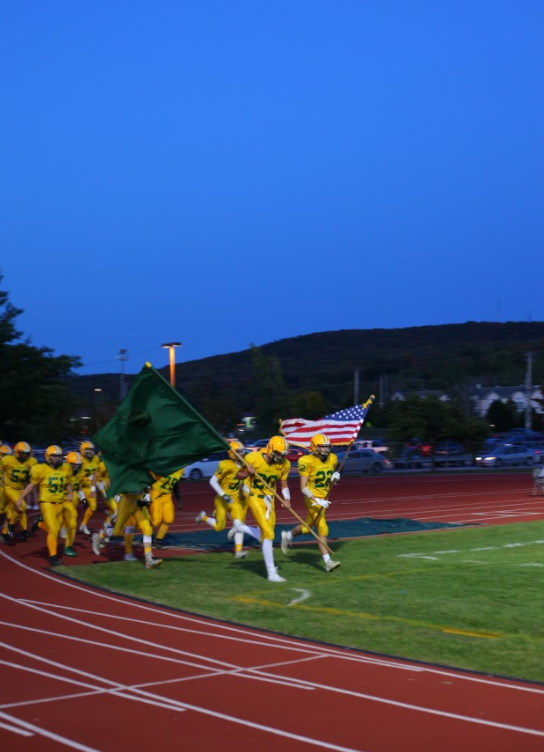 Here at Bellows Free Academy, our mascots are the Comets and the Bobwhites, but they are more than just symbols of our athletics. It means a lot more to be a Comet or a Bobwhite, and green and gold run deep. BFA has a tradition and culture unlike any other school, and its values are evident in the conduct of all who take part. Athletes, coaches, student spectators and all those involved show the values that have been instilled in the program. Values like hard work, family, pride and respect populate the minds of every athlete and coach in the program.

The origin of the Bobwhites and Comets holds the key to understanding the meaning behind these mascots. The Bobwhites are not just a bird, and the Comets are not just fast-flying space ice. They are the legacies of two people who dedicated years of commitment to the BFA community.

According to BFA athletic director Dan Marlow, Bob White was a longtime BFA biology and then gym teacher who coached football, basketball and baseball for 36 years. Due to his extended involvement in the athletic program, his name became synonymous with the teams, producing the “Bobwhites” as a nickname, a nickname that stuck and is deeply ingrained in BFA culture today.

According to Marlow, Doc Comi was a U.S. History teacher and longtime women’s basketball coach at BFA. In his 28-year coaching career at BFA, he held the young women on his team to a very high standard, which, in turn, resulted in a skilled team that had great pride in playing for Coach Comi. Speed became characteristic of Comi’s basketball teams, and they were described as akin to comets, with their consistent speed on the court. They then became “Comi’s Comets.” Once again, the nickname stuck and became a great part of BFA culture.

These coaches exemplify the characteristics of Bobwhites and Comets and are the reason that they became the mascots that define the teams, and not just nicknames that spectators use to cheer. As coaches, White and Comi instilled in their athletes the qualities of hard work, pride, family and respect.

Hard work is one of the defining qualities of any Comet or Bobwhite. When referring to a Bobwhite soccer team he helped coach, BFA social studies teacher and alumni, Jeff Moulton (’90) said,“[the team was] committed to working really, really hard and making sure that nobody outworked them.” When recalling one specific game with this team, he vividly remembers the opposing team’s coach yelling to his own players. According to Moulton, he shouted, “Look at these guys from BFA, they’re falling down left and right cramping up, but they’re getting back up and running harder than you guys are. And you ever will.” The power of these words was evident for the former Bobwhite and current teacher as he remembered them clearly and felt the weight behind them.

Moulton’s description paints a picture in the likeness of a battlefield in which BFA is climbing to the top through their determination and resilience. It personifies the value of hard work that is characteristic of BFA because even an opposing coach could see and feel the grit behind the Bobwhites. Furthermore, it was not just evident to the coaches that the Comets and Bobwhites would arrive ready to work, it was evident to the opposing athletes.

According to former Bobwhite, baseball coach and current BFA parent, Chris Smith (‘87), “what [opposing athletes] would say to me was, they always knew when they were going to play BFA that it was going to be a battle; that BFA was never going to give up. BFA wasn’t going to roll over. BFA was going to, you know, play as hard as they could. Now, they might not always be as talented…But they definitely were going to come with an attitude of we’re gonna play hard, and we’re really going to compete.” The work ethic and attitude of the Bobwhites and Comets transcended through not only the BFA teams but to the opponents, proving the power of the Bobwhite and Comet mindset. Being a Comet or Bobwhite means embodying this mindset of hard work and relentless perseverance in order to adhere to the BFA standard.

Bobwhites and Comets possess the unique ability to combine the values of pride with those of respect. At BFA, pride and respect go hand-in-hand, even though they may seem contradictory if pride was confused for arrogance. However, the pride that comes with being a part of a BFA athletics program is born from respect, and the two blend to create the distinct character of the Bobwhites and Comets. According to Comet Basketball alumni Jennifer Henry (‘91), who played for Jim Bashaw (a BFA legend who coached Comet Basketball for 14 years), “not only were you putting that uniform on and representing the school but as a teammate and playing for [Coach Bashaw], you were also representing him. And you wanted to do well, and you wanted to conduct yourself in that way because you respected him.”

This mentality is indicative of what it means to be a Comet or Bobwhite because it shows that the pride that comes with putting on that green-and-gold jersey comes from wanting to properly represent the school and coaches because of a great respect for them.

Another aspect of being a Comet under Coach Bashaw that Henry recalls is a quote of Bashaw’s, stating, “practice makes permanent.” She describes the quote as being used in practice to drive home the point that the more you practice something, even if it is incorrect, it will become the permanent way that it is executed. However, this quote did not just encourage the proper behavior on the court, but in life. According to Henry, “You’re not only encouraging behavior on a field or court, but you’re encouraging that behavior in life and you’re shaping those young students and athletes so that they become meaningful, considerate, kind people in society…you’re conducting yourself this way because you’re wanting to conduct yourself this way as a person and as a human and finding that kindness and that positivity.”

The values taught to Comets and Bobwhites by coaches are not just ones to help perform in a game, but to be an upstanding human being. To be a Comet or Bobwhite means to be an athlete, but to first be a good person. It is pride in having developed a character of the highest esteem. According to current Comet Maren McGinn (‘21), “I think it started at BFA for me where I realized how important my character was. My presence, my attitude on the court, or on the field, it affects so much more than what I would have thought coming into high school.”

According to McGinn, the focus on character at BFA is unlike any other program she has been a part of, and she said, “it creates a family where we focus on that, and if we build upon our character, we’re able to persevere through tough challenges…” This connects the importance of character to another defining aspect of being a Comet or Bobwhite: family.

Comets and Bobwhites are more than just teammates, they become family. This is a result of the shared values that are perpetuated throughout the BFA athletic program. When asked what it means to be a Comet, McGinn responded, “It means family to me. It makes me feel at home, I’ve been a part of a lot of teams, and it never feels the same as it does as a Comet.”

The atmosphere of a Comet or Bobwhite team is truly unique and provides a close-knit bond amongst the teams at BFA. However, being a Comet or Bobwhite doesn’t just mean a family for your four years of high school. It means family forever. According to Comet Alumni, business teacher, former softball and soccer coach and current volleyball coach Mary Brouillette (‘84), “[Being a Comet] means family. Relationships that last a lifetime. It means having people that care about you long after you leave BFA because we say ‘once a Comet always a Comet’ and ‘once a Bobwhite always a Bobwhite.’”

Being a Comet or Bobwhite means taking the values of hard work, respect, pride and family and weaving them into your character. It means that you are more than an athlete and more than the sport you play. Spoken best by BFA athletic director Dan Marlow, the foundation is “love, serve, and then care.” These encompass the whole of the Bobwhite and Comet purpose and are at the core of those in the BFA athletics program.

According to Marlow, “Love, you gotta love what you do. Which means you’re not satisfied being average. Average is the best of the worst, and the worst of the best… And you’re gonna love the people around you… and the connections that you have…” This love for the game and the people that surround one is what drives the Bobwhites and Comets and cultivates the hard work and dedication present on and off the field.

Marlow continued, “It’s about serving, it’s picking up stuff after you finish. It’s cleaning up our bleachers after a football game, or a soccer game, in the end why it’s not a show thing; it is just the right thing to do because, in this community, you have to be willing to help each other.” The foundation of serving is what makes Bobwhites and Comets so dedicated to making respect a pillar in their actions, and the foundation of caring is what makes Bobwhites and Comets fill these actions with compassion.