Senior Parking in the Pandemic 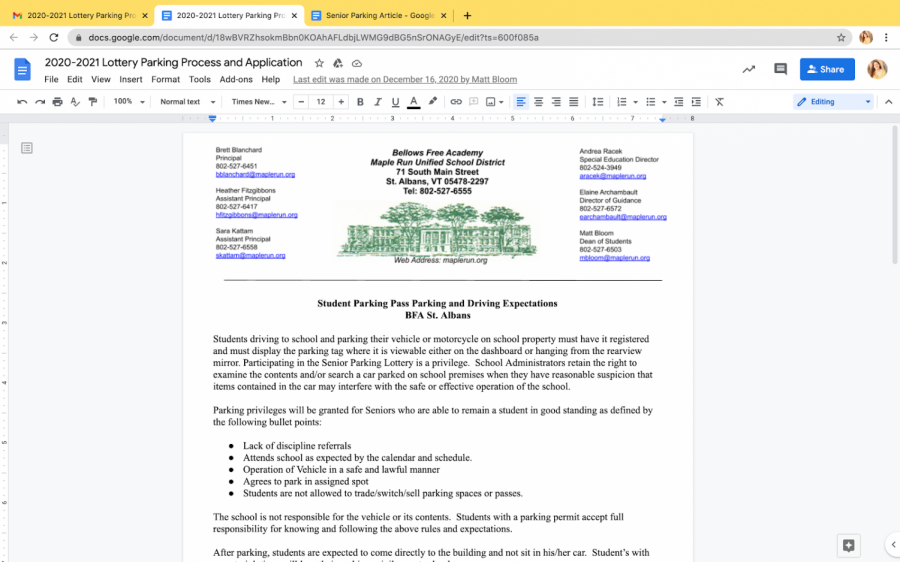 A battle for student parking, which the Bellows Free Academy student body has been fighting since the 70’s, has finally become a reality. The class of 2021 has been given the opportunity to enter in a lottery to gain themselves a senior parking spot for six weeks right on campus.  For the seniors who are selected to receive a spot, all they have do is show proof of their driver’s license, their car insurance, fill out the application and put down $10 that will be returned to them when their six weeks are up.

Will Dumont (‘21) recently received his parking pass.  “I was pleasantly surprised when I got the email. On-campus parking wasn’t something I thought I would ever see while I was at BFA,” Dumont said.

Kayla Brouilette (‘21), who also received a parking pass, said, “It’s been great…very convenient.  You can park anywhere in the middle between the buildings.”

Senior parking was made a reality by BFA’s new principal, Brett Blanchard. Blanchard is an advocate for student voice.  He heard students’ pleas for student parking and sought to take action.

Matt Bloom, BFA’s Dean of Students, said, “Mr. Blanchard brought together a group of students, and we started meeting every two to three weeks.  [It was] Mr. Blanchard’s way [to gather] student voice.  We adults can make decisions all day long, but if it’s not felt by, or affecting students in a positive way, it’s like we’re just spinning our wheels.  Blanchard is way into student voice…[which] helps us get a good beat on where kids are at.”

Zachary Lovejoy (‘21), who has been working closely with Blanchard, said, “I think a healthy part of the school community is student voice. Where students’ ideas and thoughts are brought to fruition, and I think student parking is just one example of that.”

Because of the pandemic, the student body’s regular routine got flipped on its head.  Many students were hoping for the normalcy of school back, especially this year’s seniors as they are nearing the end of their time at BFA.

“Because of COVID this year, senior privileges were not able to get started like we have in the past.  The privilege of going off campus during lunch was pretty much it and, because of COVID, we’re not having folks go on and off campus because of the increased risk of transmission. We were like, to this small group of kids, what are you looking for?  What do you think would be good, and what is out there that we can do for seniors because it’s kind of a coming of age, right? You should be able to celebrate being a senior somehow,” Bloom said.

Seniors are not able to enter back into the lottery after their six weeks are up as Bloom would like to give this opportunity to any and all seniors.

Bloom also stated, “If it turns out that I’ve got extra time or extra spaces at the end that, I will throw names back into the hopper.”

What about the seniors that don’t drive? Don’t worry,  the administration is thinking of that, too.

“I think the one thing that I haven’t figured out for seniors is that not all seniors drive, so it’s really not equitable. If you’ve got a car, it’s kind of like [a] plus or privilege. So we are trying to think about how to how to accommodate seniors on the flip side,” Bloom said.