Bobwhite Hockey Back in Action for 2021 Season 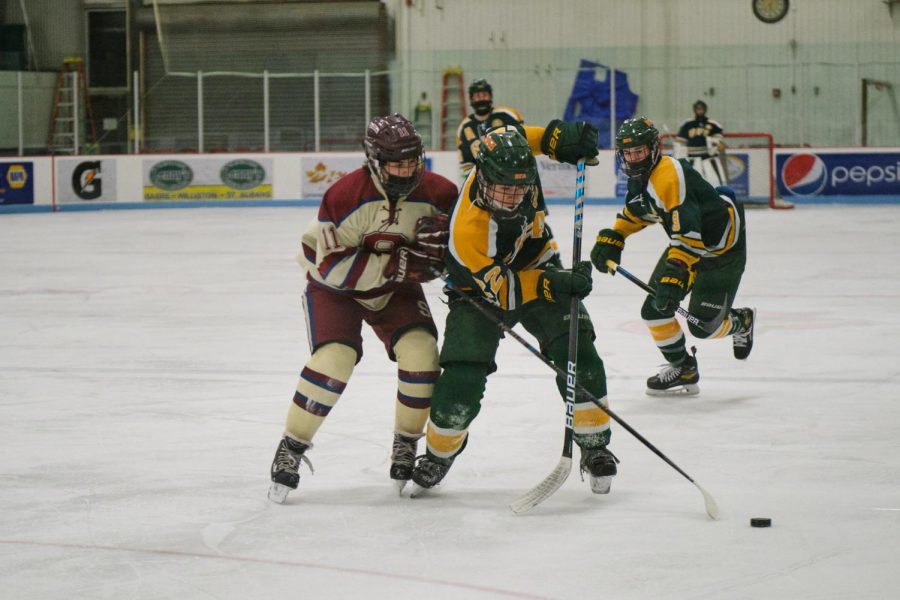 When Governor Scott announced that indoor winter sports games could begin for Vermont schools, Bellows Free Academy, St. Albans, Vt. Bobwhite ice hockey Head Coach Toby Ducolon said he felt “relieved.”  He added, “While we were hoping for [games to begin] earlier, we are still happy that we get a chance to play eight games…The guys are very happy to get some real competition.”

Ducolon also spoke on the return of some normalcy to practices. “Initially we were only allowed so many guys on the ice…we had to have a certain amount of guys sitting on the bench and rotating through… now, probably the only thing that is affecting us currently is wearing a mask and social distancing a bit.”

However, masks didn’t seem to be a problem in the Bobwhites’ 5-2 win over Spaulding last Saturday. Captain Christian Vallee (‘21) was the first to score a goal late in the 1st period on a power play, but Spaulding answered with their own powerplay goal in the second period to bring the score to a tie.

At the end of the 2nd period, Spaulding scored another goal to take the lead. This would be the last goal Michel Telfer (‘22) would let in.

Early in the 3rd period, Sean Beauregard (‘22) tapped one into the net to make it a tie game once again. BFA quickly scored another goal with a tip from freshman Daniel Rafferty (’24) off Camden Johnson’s (‘23) shot from the point.

The Bobwhites held on to their lead and scored two more unanswered goals, the first by Levi Webb (‘22) and the last by Mattheau Merrill (’22), for an empty net goal at the end of the game.

Following the Bobwhites’ first game, Coach Ducolon said, “We have passed the first test.” He also said that he is optimistic about how his team is looking this year:  “We are happy offensively, we are happy defensively and we like our goaltending.”

To see the BFA Bobwhites’ schedule and learn how to view their games, click this link https://sites.google.com/a/maplerun.org/athletics/