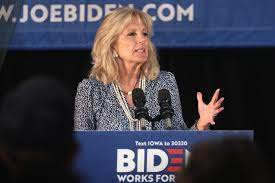 On Dec. 11 2020, The Wall Street Journal published a piece written by Joseph Epstein claiming Dr. Jill Biden, the future first lady at the time, should drop her doctorate title before moving into the White House on Jan. 20.

Epstein introduces his op-ed by first referring to Dr. Biden as “kiddo” before claiming that “‘Dr. Jill Biden’ sounds and feels fraudulent, not to say a touch comic.” The piece’s blatant sexism and miseducated statements should have been enough for the op-ed to never have been published; the least The Wall Street Journal could do now is take the opinion piece down and apologize to Dr. Biden.

Epstein claims in his piece that the “prestige” of doctoral degrees has seen a sharp decline, and he provides a comparison between candidates allegedly fainting during their exams at Columbia University decades ago to exams that he oversaw where candidates and teachers addressed each other by first name. After reading this the first time, my immediate thoughts were whether or not the story about candidates fainting was remotely true, and how he can criticize present-day doctoral candidates for using their first names but call someone who graduated with their doctorate fourteen years ago, and spent eight years serving as second lady, “kiddo.”

In his piece, Epstein continuously rambles about honorary doctorates and how, “Such degrees were once given exclusively to scholars, statesmen, artists and scientists.” Dr. Biden’s doctorate, however, is not an honorary degree, rather one she earned from the University of Delaware in 2007. Why Epstein includes vast amounts of ranting about honorary doctorates is unclear as it has nothing to do with his claim that Dr. Biden should drop her title.

According to an NPR article about The Wall Street Journal’s handling of criticism surrounding the piece, “Epstein broadened his criticism to include anyone using the title who is not a physician,” yet it is hard to imagine someone like Epstein publishing a similar piece about someone like a dentist, who is required to have a doctorate in order to practice but is not a physician; why is it different for anyone in education? While some may argue that Epstein provides a distinction between the sciences and other fields, why should it matter? Regardless of their field, earning your doctorate is no small feat– whether it be in the sciences, education or philosophy.