Student Perspective: The Purpose of Advisory 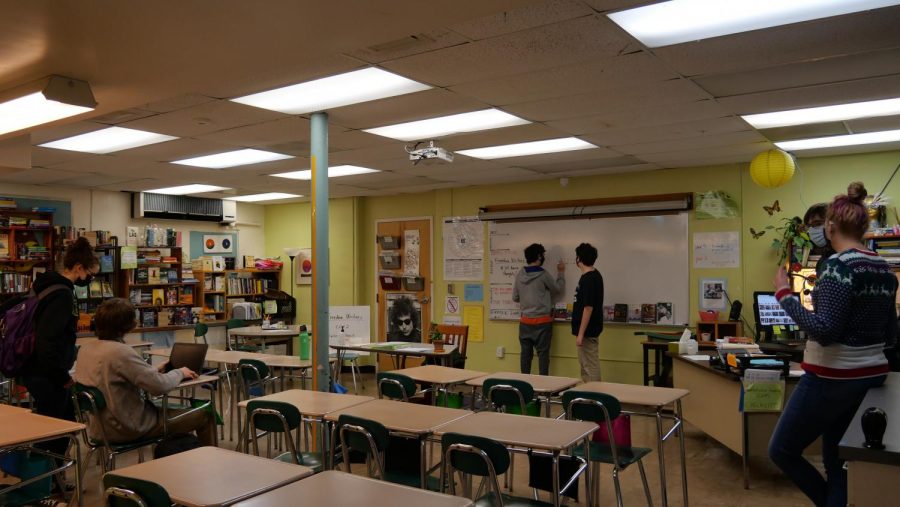 Please note: This is part of a student perspective series by Rachel Ledoux.

Whether students use advisory to socialize, work on their PLP or just unwind, advisory is a regular part of the day for Bellows Free Academy students. However, many students don’t believe that it should be. Recently, The Mercury got the opportunity to find this out firsthand.

Sara Kattam, BFA’s Assistant Principal of Curriculum and Instruction, said that the purpose of advisory is, “focused on supporting students and promoting positive school culture and climate,” which, she said, includes strengthen[ing] relationships in school…disseminat[ing] information about what is happening in school…support[ing] students in goal-setting and finding resources… and facilitat[ing] initiatives as needed.”

According to a survey conducted by The Mercury about the purpose of advisory, which 79 students responded to, students seem to understand this. Approximately 85% of students surveyed gave a purpose of advisory that was close to, if not exactly, what Kattam said. Making bonds and connecting with others was a common theme of how students view advisory time.

“The purpose of advisory is to make sure that people have bonds throughout the school,” Janelle Hardy (‘22) said. “For me, advisory is a time for me to reset during the school day and to create stronger bonds with the people around me.”

However, not every student had the positive opinion of advisory that Hardy did. Over half of the student respondents said that they don’t feel like advisory is a good use of their time during the day.

Some students noted that the 10-minute Monday, Thursday and Friday advisory periods are too short for them to get anything meaningful done.

According to Jacob Holmes (‘22), “By the time I get all of my materials out and get into the right headspace to work, the bell has already rung.”

Many students expressed a desire for a longer Enrichment or lunch period instead of having an advisory at all.

“Advisory should either be merged with Enrichment, be the first class of the day, or just scrapped altogether,” Grace Peyrat (‘22) said.

This idea was corroborated by a student who wished to remain anonymous, who said, “I want to come to school, do the classes I need to graduate and then go home.”

For those who did view advisory positively, though, there were many common reasons why.

Many students noted the social and mental health benefits of advisory and said that they enjoy having the short break between classes.

“It’s very important to have a break between classes where you can just sit down, talk to your friends, check social media and get in a good mindset before heading to the next class,” Elio Haag (‘22) said.

Several students noted that they enjoy the opportunity to get work done, even if it is short.

One student who wished to remain anonymous said that “Sometimes [advisory time] is good to study before the next class.”

When asked if she had any advice for students about how they can make the most of their advisory periods, Kattam had the following to say:   “Get to know your advisor from the start. Share your thoughts, plans and questions. They can help you find clubs or activities that align with your interests or help you plan what classes to take. If you have concerns, ideas or questions, your advisor is a great place to start.”

Kattam also noted that if students have any ideas on how to improve advisory, they should tell their advisor or reach out to her.